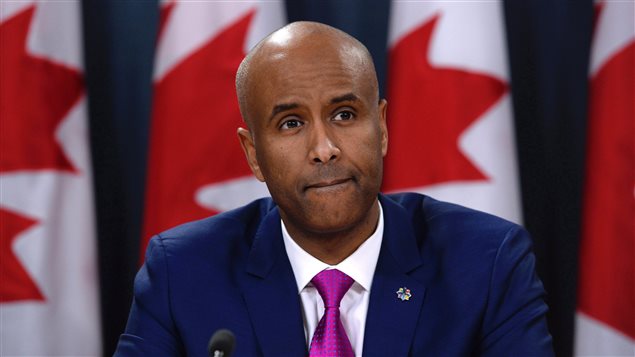 No need for ‘Canadian values’ tests for immigrants: immigration minister

Speaking to Radio Canada International in an exclusive interview on the sidelines of the 19th National Metropolis Conference on Friday, Hussen reacted to a recent poll commissioned by Radio-Canada.

The internet poll surveyed 2,513 people across Canada about a variety of issues affecting the country.

Canadians OK with screening for values

While the poll showed that Canadians in general support immigration and see it as a net contributor to the country’s economic well-being and the social fabric, it also revealed certain unease about the level of integration of immigrants, especially from Muslim countries.

About 60 per cent of Canadians see refugees as a positive force, and 83 per cent believe other cultures enrich our society, the poll’s findings show.

However, 74 per cent of respondents said they would either be “very” or “somewhat” in favour of screening immigrants with a test on Canadian values, as suggested by Conservative Party leadership candidate Kellie Leitch.

“We have laws, we have the rule of law in Canada, we have the Charter of Rights and Freedoms, we have multiculturalism that respects differences and believes that those differences make us stronger, not weaker,” Hussen said. “Our diversity is great source of strength and gives us a competitive advantage around the world because we are able to have individuals in Canada who immigrate to our country, who have different faiths, from different backgrounds, different languages, and yet we integrated them successfully.”

(click to listen to the full interview with Ahmed Hussen)

The Canadian model of immigration makes sure that there is a clear path to citizenship and the vast majority of immigrants do become fully integrated Canadian citizens, Hussen said.

While there are countries around the world who have chosen to close their doors to immigration and become less open to those seeking protection or better lives for themselves and their families, Canada has taken the opposite view, Hussen said.

The same CROP poll found that nearly half of Canadians (47 per cent of respondents) feel Muslims are “poorly” or “somewhat poorly” integrated into society.

While Canada can always do a better job of integrating immigrants, the country settles and integrates immigrants much better than many other countries, said Hussen who has been an active member of the Somali-Canadian community and served as the president of the Canadian Somali Congress.

“I just returned from a trip to Europe where I met government officials and NGOs in the United Kingdom, Germany and Switzerland, and in all those interactions I got the message from those stakeholders that Canada does integration and settlement really-really well,” Hussen said. “In fact, they wanted to learn more about how we have been so successful at something that has been so difficult for many other countries to do.”

Canada has a lot to be proud of when it comes to settlement and integration, and moving people towards citizenship, which is “the ultimate sign of integration,” said Hussen who came to Canada alone at the age of 16.

One comment on “No need for ‘Canadian values’ tests for immigrants: immigration minister”