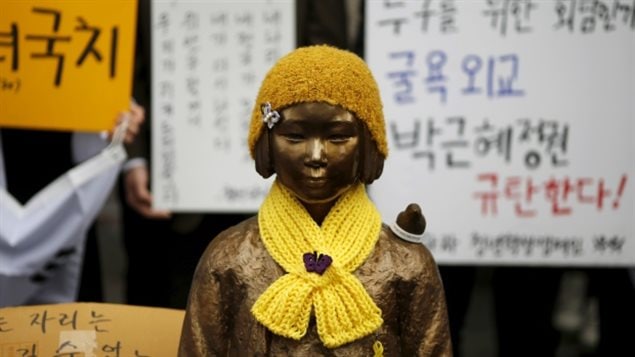 Seoul 2016: During a weekly protest in front of the Japanese embassy, one of the so-called *peace statues* is seen depicting a young Korean girl forced into sex slavery by occupying Japanese in WWII. As part of a deal with S Korea, Japan wanted all such statues removed.
Photo Credit: Kim Hong-Ji/Reuters

It is another tragic chapter of WWII.  The Japanese Imperial Army forced tens of thousands of girls and young women from occupied lands to become sex slaves for their soldiers.

Strange as it may seem, this horrible tale is not widely known. For the women who suffered, they endured shame and rejection all their lives. Now their numbers are few, but they are seeking an honest apology from Japan.

Canadian filmmakerTiffany Hsiung documented the tales and battle for an apology of three of remaining survivors. The National Film Board (NFB) documentary is called “The Apology”

Officially Japan has expressed sadness, sorrow, even remorse, for it’s wartime actions, but generally has avoided direct apologies or clear admissions of atrocities.

In 2015 the Japanese made an apology expressing remorse and paid the equivalents of about $8.6 million USD into a fund for South Korean women but without calling it “compensation”.

In expressing remorse, Japanese Prime Minister Abe also said the deal should “finally and irreversibly” resolve the issue, adding that since remorse was expressed, “future generations should not have to keep on doing so”

However, the deal was reached without consultation with the survivors, and the money does not go directly to them and that expressions of remorse is not an admission of culpability nor a direct apology.

Director Hsiung says many people who have seen the film were unaware of this atrocity and have been expressing their appreciation for bringing the story to a wider audience.

The Apology continues to be shown in movie theatres this month in S.Korea, and at film festivals around the world. It will be broadcast on Canadian TV later this year.