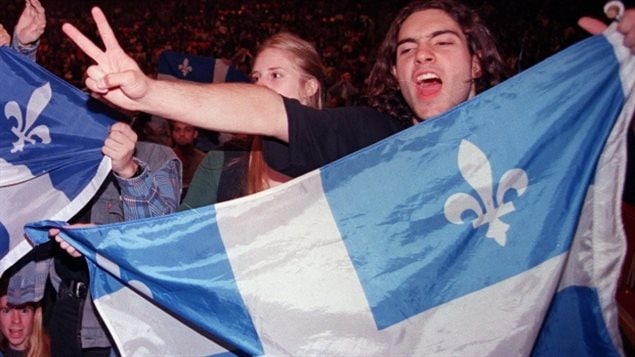 A YES (Oui) side supporter during the 1995 referendum campaign which led to the federal Clarity Act, and to the provincial Bill 99 in response. After years of delay the Quebec court heard arguments this week from both sides to determine if Quebec’s Bill 99 on separation is constitutional or not.
Photo Credit: Canadian Press/Paul Chiasson

The breakup of Canada- The legal wrangling encore

Canada, Quebec independence, and the constitution.

It is a long and complicated story and process.

In Quebec in 2000, the then governing  “separatist” Parti Quebecois passed Bill 99 which stated that it alone could decide whether it would leave Canada to become an independent nation. It also said 50 percent of the votes plus one more constituted a majority vote, and also that the federal government and the rest of Canada had no say in the matter. This had been the separatist position for many years previously and during the referendum campaign of 1995.

That notion runs counter to the Canadian constitution and in 2001 that provincial law was challenged by Keith Henderson, who was then leader of the Equality Party,  a now defunct provincial Anglophone rights political group.

That battle has dragged on for years until finally heard this week by Quebec Superior Court.

Keith Henderson is currently president of a non-profit advocacy group, the Special Committee for Canadian Unity

To begin somewhere in the middle, in 1995 the province of Quebec then under a “separatist” government held a second referendum  on whether the province should become an independent nation. (The first was in 1980 which separatists lost)

It was a bitter campaign marked by accusations of cheating by both sides, the Yes side, for independence, and the No side for staying within the Canadian confederation.

The separatists/sovereigntist-“independentistes”, also claimed and stated later in Bill 99, that 50% of the population plus one vote (50+1) constituted a majority.

In the end the 1995 referendum vote was extremely close with 50.58% of the population voting against separation, or a majority of just over 50,000 votes.

Because of the narrowness of the vote, the convoluted question posed, and Constitutional issue, the federal government asked the Supreme Court of Canada to rule on the consitutionality.  They did ( in a still disputed decision) that Quebec could separate under certain conditions.  The federal government then passed “The Clarity Act” setting out conditions which said that Quebec could separate if there was a clear majority (not 50+1) on a clear question after which “Canada” would begin negotiate conditions with Quebec.

In reaction to this concept of “clear majority” (not 50+1) , the then Parti Quebecois (separatist) government passed Bill 99 in 2000.

That in turn prompted the constitutional challenge by Henderson in 2001. This challenge was joined in 2013 by the federal government, provoking bitter reaction in Quebec even by the ostensibly “federalist-leaning” provincial Liberal government.

The Liberal Party of Quebec, in power since 2013, has somewhat ironically been fighting against the legal challenge. In the court case this week, the opposition also refused to allow Henderson to make a statement.  The Quebec Superior Court judge is likely to make a ruling in late August or September.

Henderson says, the Quebec government, if they lose, could either drop their case or appeal to a higher court.

If the judge agrees with the Quebec government, the federal government would almost certainly appeal.

Henderson says it potentially the debated could end up in front of the Supreme Court of Canada. He says the obligation to abide by the Constitution, which means separation requires an amendment to the Constitution (meaning all of Canada has a say) could result in a whole new battle over the legality of separation at all.