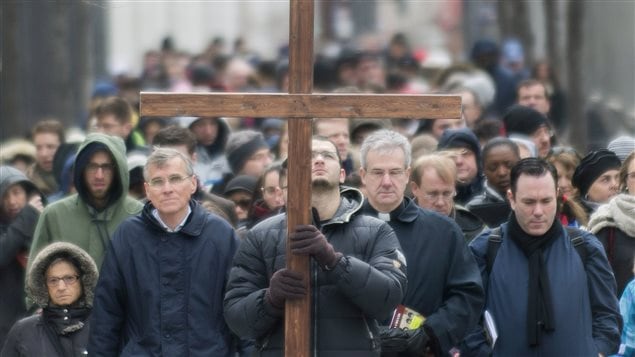 A man walks with a crucifix along with the faithful as they participate in the Way of the Cross on Good Friday in Montreal, April 18, 2014.
Photo Credit: PC / Graham Hughes

As millions of Canadians get ready to enjoy the long Easter weekend, a new study shows that even if they skip religious services, most Canadians are much less hostile toward religion than declining church attendances might imply.

In fact, only about one-fifth of Canadians could be described as “not religious at all,” said Shachi Kurl, executive director of the Angus Reid Institute, which conducted the study.

“What stands out to me is when we have conversations about growing secular Canada, the secularization of the country or the idea that people are turning away from the concepts of God and faith, and spirituality,” said Kurl, “they may indeed may be turning away from organized religion but they are still claiming in varying degrees a strong connection to faith.”

(click to listen to the interview with Shachi Kurl)

The study divides Canadians into four broad categories, she said. The “religiously committed,” who make up about a fifth of the population, are the first category.

“These are people who do go to church, or temple of synagogue, they believe in God, they regularly attend their congregations,” Kurl said.

Then there the “privately faithful,” for whom faith and religion, and their own connection to God is much more a private affair, Kurl said.

“Perhaps, they are not attending services but they are still praying, they still have a very strong connection to their gods,” she said. They make up about 30 per cent of the population.

The “spiritually uncertain” category encompasses another 30 per cent of Canadians.

“They have some level of religiosity or spiritualism but are, perhaps, drifting away from it,” Kurl said.

And the final category is the “non-believers,” who make up about 19 per cent of the population.

Four in five Canadians are claiming some connection to God and faith and religiosity in their lives, Kurl said.

“I think that is striking because what it tells us is, perhaps, we are not as a country and as a society turning away from these concepts, whether they are in Judeo-Christian path, or the Hindu, of the Sikh, or the Muslim faith in the way that I think many journalists, writers, politicians and the chattering classes would have us believe,” Kurl said.

However, there are big differences in attitudes towards religion and faith based on geography and age.

“The most religious followers, the most devout Canadians, the big “R” religious, the big “G” god believers are found on the Prairies, in Saskatchewan, Alberta or Manitoba,” Kurl said.

Approximately three-in-ten from Saskatchewan (32%), Alberta (29%) or Manitoba (28%) are considered as religiously committed. By contrast, only 14 per cent of Quebec residents and 19 per cent of British Columbians can say the same, according to the study.

The age and gender of respondents is another important element. The non-believer category is made up of 61 per cent men, and a disproportionate number of them under the age of 55. On the opposite end of the spectrum, the more religious segments tend to be older and female, Kurl said.

Immigration has also played an important role in Canada’s faith landscape, she said.

Polling data and information from Statistics Canada census data shows that the rejuvenation of congregations, the reinvigoration of churches in Canada has been driven by immigration in the last 15 years, Kurl said.

“If you look at the youngest congregants across the board in this country, who is going to religious services regularly regardless of what religion they belong to?” Kurl said. “They’re coming from South Asia.”

The youngest religious adherents in Canada are Muslim, followed by adherents of Sikh and Hindu faiths, she said.

Words such as sin, morality and mercy tend to be less positively viewed, than themes that cut across all faith, such as forgiveness, kindness and love, Kurl said.