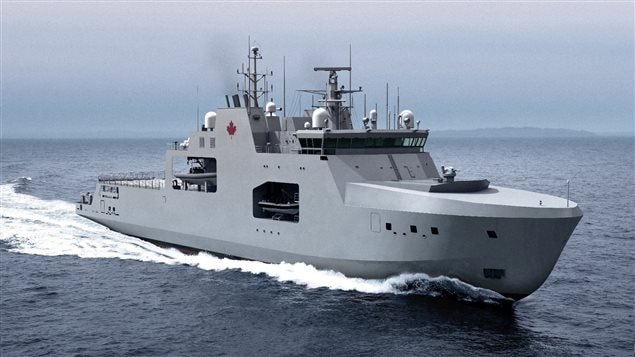 Some traditions die hard in the Royal Canadian Navy and having famous women name and sponsor new ships is one of them. The navy has announced that the prime minister’s wife, Sophie Grégoire Trudeau has agreed to sponsor the lead ship in a new class of Arctic and offshore patrol vessels.

The vessel is the HMCS Harry DeWolf, named after a Canadian naval hero of the Second World War. He took part in numerous duties involving the escort of convoys across the Atlantic, the rescue and evacuation of Allied troops from Dunkirk, France in 1940 and is said to have led in the sinking of many enemy ships.

The ship is currently being built by Irving Shipbuild8ing in Halifax and is expected to be launched in 2018. And yes, Trudeau will break a bottle of champagne across the ship’s blow at the official ceremony.

The navy acknowledged her many accomplishments in causes such as gender empowerment, mental health, self-esteem and equality issues related to women and children.

The 12 Arctic and offshore patrol vessels will be more than 100 metres long and will be ice-capable.