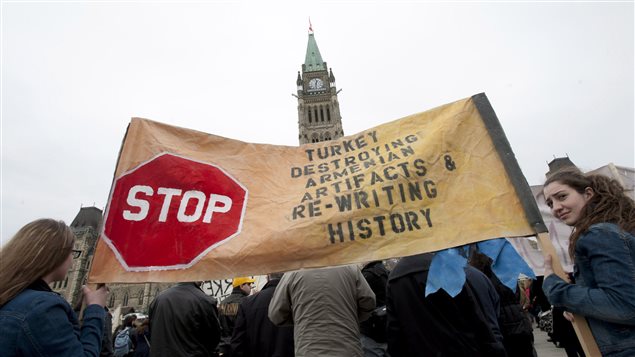 Thousands of Canadian Armenians marked the 102 anniversary of the 1915 Armenian genocide in Ottoman Turkey with public gatherings and marches in cities across the country today.

The largest event was held in Ottawa where several hundred people gathered at a ceremony on Parliament Hill and then walked down the streets of the national capital to the Turkish embassy to demand that Turkish authorities stop their campaign of denial of the genocide.

Simon Izmirian, an executive member of the Armenian National Committee of Canada and one of the organizers of the march in Ottawa, said as a great-grandchild of a genocide survivor he felt compelled to participate in the commemoration not only to pay tribute to his ancestors but also to demand justice.

“The reason why we are here today and the reason why it’s important for us to be here today is to stand collectively together to fight for a political cause,” Izmirian said in a phone interview from Ottawa. “That cause is the cause of solidarity where we’re going to stand together to voice our desire for justice and for the perpetrators to be held accountable for what they’ve done in 1915.”

Historians estimate that as many 1.5 million Armenians were killed in a brutal campaign of massacres and death marches into the Syrian desert organized by the government of Young Turks during WWI. 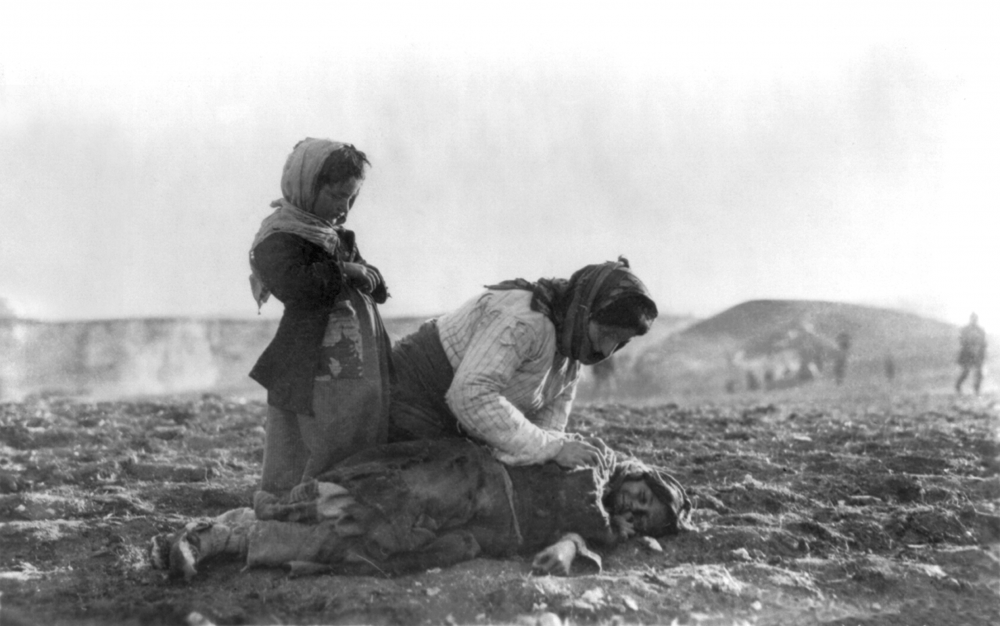 April 24 marks the symbolic beginning of the genocide when 234 of prominent Armenian intellectuals, politicians and community leaders were rounded up by Turkish police in Istanbul and sent to camps in the interior of the country where most were executed.

To this day Turkish authorities deny that genocide occurred and wage a high-stakes diplomatic and public relations battle to oppose its international recognition.

“This day honours the memory of those who unjustly lost their lives and suffered during the genocide. We pay tribute to them and their descendants, many of who now reside in Canada,” Prime Minister Justin Trudeau said in a statement. “On this occasion, Canadians – regardless of faith or ethnic background – stand together in solemn remembrance and reaffirmed dedication to ensuring that we never stand indifferently in the face of hate or violence in any form.”

Rona Ambrose, the interim leader of the official opposition Conservative Party, said April 24 is “a day to remember, but also to ponder about the events that left a deep trace on the modern world.”

“Every year Canada and other countries make use of this anniversary to shed light on the existing conflicts and to say that they cannot have a similar tragic ending,” Ambrose said in a statement. “We do that also to support the global efforts aimed at peaceful coexistence.”

Kyle Matthews, executive director of the Montreal Institute for Genocide and Human Rights Studies at Concordia University and a Fellow at the Canadian Defence and Foreign Affairs Institute, echoed Ambrose’s sentiment.

“Armenians do feel that the terrible tragedy that struck and almost destroyed their community over 102 years ago is not being acknowledged, that there is still a lot of denialism out there, that there are forces at play that want to minimize their suffering.”

Denial is the final stage of genocide and Turkey is a long way from coming to terms with its past, he said.

“People are imprisoned for talking about the Armenian genocide, there have been political assassinations in Turkey of public intellectuals and journalists writing and talking about this,” said Matthews. “People say the last element of genocide is denying it, that’s the final stage.”

The Turkish government is also actively trying to dissuade other governments from following in Canada’s footsteps.

“This is part of a longer issue that Turkey has been continuing on and it’s really a battle for facts,” Matthews said.

There is a vast amount of scholarly literature that has been produced in the last 100 years that makes it very difficult to deny that what happened to Armenians was genocide, he said.

“I think the history books do tell us that it was much more than a ‘civil war,’ that [there was] a dramatic population decrease of Armenians, dispersions around the entire region, fleeing the Ottoman Empire and Ottoman Turkey,” Matthews said. “I think it’s pretty clear idea of what really took place.”

Matthews is also involved in organizing an annual march that began around the commemoration activities of the Armenian genocide centennial in 2015.

That’s when the idea of the annual March for Humanity and Against Genocide was born.

The first march in 2015 attracted about 10,000 people including then Liberal leader Justin Trudeau who then went on to win the federal election and become Canada’s prime minister.

This year on May 27th organizers are hoping to attract the biggest crowds ever, Matthews said.

“It’s part of a wider human rights weekend for Montreal’s 375th anniversary and we’ll be marching with people from Amnesty International, human rights leaders from around the world are coming to Montreal to participate in this and other events,” Matthews said. “So it’s important that we don’t forget the Armenian genocide.”