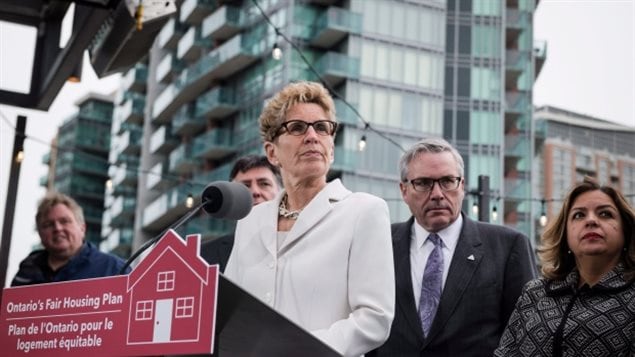 In the face of skyrocketing housing and rental costs, the Ontario government has followed the lead of the west coast city of Vancouver.

In the face of many claims that foreign investors are artificially inflating housing prices, Ontario has put a 15 percent additional tax on foreign buyers.

One of the measures included new rental increase limitations which had been applied previously to units built before 1991.

Reaction has been mixed with one developer saying with rent controls he will stop several apartment projects he had planned.

In making the announcement, Ontario Premier Kathleen Wynne said her government will now wait to see the affect of the measures and take more action if necessary.

Home prices in Toronto have jumped 33 percent in the last twelve months, so that the average price of a house is not around one million dollars.

-After two consecutive years of double-digit gains, average house prices in the Toronto region reached $916,567 in March 2017, up 33.2 per cent from a year earlier.

-RBC Economics recently highlighted that housing affordability in the Toronto area for the fourth quarter of 2016 was at its second-worst level on record since the mid-1980s.

-According to Urbanation, the average rent per square foot for new leases in the Greater Toronto Area condo market rose 11 per cent in the last quarter of 2016 compared to a year earlier, the fastest pace of growth since at least 2011.