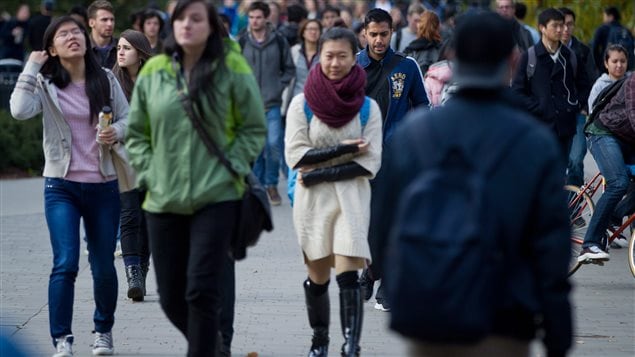 A student who needs to take out a $30,000 loan would have to pay $10,318 in interest over 10 years, says the Canadian Federation of Students.
Photo Credit: PC / Darryl Dyck/Canadian Press

The Canadian Federation of Students says that government underfunding of post-secondary education is fueling the crisis of household debt in Canada. Canadian families have debts that average 171 per cent of their disposable income and amount to more than the size of the Canadian economy, according to a new report it commissioned.

While elementary and high school education in Canada is free, undergraduate tuition can cost between $2,660 in the province of Newfoundland and Labrador to $7,868 in Ontario per year. The annual fees are much higher for undergraduate programs in dentistry, medicine, pharmacy and law ranging from $10,983 for law  to $18,934 for medicine.

There are also additional compulsory fees for things like athletic programs, health services and student associations.

Discrimination against women, the poor

The federation says high tuition discriminates against students from poor families. They must take out loans and pay interest over several years, meaning the total cost of their education is much higher than it is for those who can pay up front.

The report also shows a clear majority of Canada Student Loans recipients and users of a repayment assistance program are women.

Student debt ‘slowing down the economy’

“Saddling students, graduates and their families with massive amounts of debt is slowing down the economy,” said Bilan Arte, chair of the Canadian Federation of Students. “Young people are being forced to delay life milestones and saving for their families’ future in order to make payments on their student loans.”

The federation is demanding “fundamental change and universal access to public post-secondary education.”