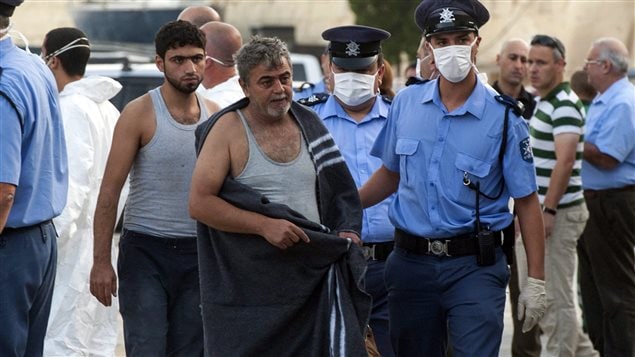 The plight of refugees like these whose boat capsized off Malta was the inspiration for the book called In Many Waters.
Photo Credit: Lino Arrigo Azzopardi/AP Photo/OCT. 12, 2013 file photo

Novel tells of recent refugees and past slavery in Malta

When she arrived in Malta ten years ago, two things shocked Canadian author Ami Sands Brodoff; the  horror stories of refugees coming by boat and the history of Jews who were enslaved there in the 17th and 18th centuries.

“So, the plight of the Jewish slaves echoed the refugees’ current plight and these interconnected threads knit together marginal characters forced from their homes, displaced from families and identities seeking refuge and sanctuary elsewhere. And the seeds of the novel were planted,” she says.

The novel, called In Many Waters, opens powerfully with a young refugee woman floating in the Mediterranean Sea after her boat has sunk. She is alone. It traces her rescue and eventual incarceration in a refugee detention centre.

At the same time, another main character returns to the place where her parents drowned and learns about a mysterious family member and a chain of secrets.

‘A novel takes you deep inside the skin’

Brodoff conducted extensive research about refugees and spoke with many of them to help her construct her story. She agreed that it is one thing to hear about refugees on the news and quite another to experience it through a novel.

“What a novel does, it takes you deep inside the skin of the characters. It really is a way where you can experience what they experience and…(where) you are moved and have empathy, whereas the news often feels out there.

‘What is our responsibility?’

“I think art right now is more important than ever and I think as artists it’s very important that we’re politically concerned right now.”

Brodoff  says she hopes the novel helps people “think about ‘what is our responsibility to strangers, who do we help, who do we love, who do we make a part of our family?’”

Especially in light of events in the United States, where refugees, immigrants, Muslims, and members of the LGBT community are often seen as others, she says one of her themes is that “nobody is a stranger, nobody is another. We are our neighbours’ keepers.”