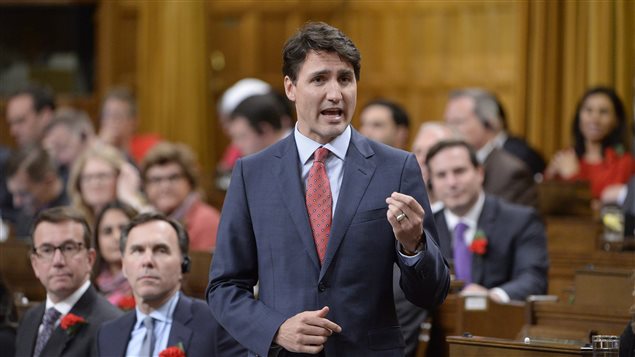 Prime Minister Justin Trudeau responds to a question during question period in the House of Commons on Parliament Hill in Ottawa on Wednesday, May 3, 2017.
Photo Credit: PC / Adrian Wyld

Prime Minister Justin Trudeau called France’s President-elect Emmanuel Macron on Sunday to congratulate him on “his decisive election victory” and to propose a meeting “soon,” according to the Prime Minister’s Office.

The Prime Minister’s Office says the two leaders reaffirmed the “rich and diverse bilateral relationship that exists between Canada and France.”

“Prime Minister Trudeau emphasised that he looked forward to working closely with President-elect Macron to ensure the ongoing prosperity for citizens of both countries and the EU, ‎including through the promotion of shared values such as diversity and pluralism, as well as the timely ratification of the Canada-EU Comprehensive Economic and Trade Agreement,” the read-out of the prime minister’s call said.

French voters elected the centrist as the country’s youngest president ever on Sunday, delivering a resounding victory to the unabashedly pro-European former investment banker.

Marine Le Pen, his far-right opponent in the presidential run-off, quickly conceded defeat to the 39-year-old Macron after voters rejected her “French-first” nationalism by a large margin.

The result wasn’t close – Macron had 64 per cent support with about 90 per cent of votes counted. Many of the more than 57,000 French nationals in Canada cast ballots Saturday in the run-off election.