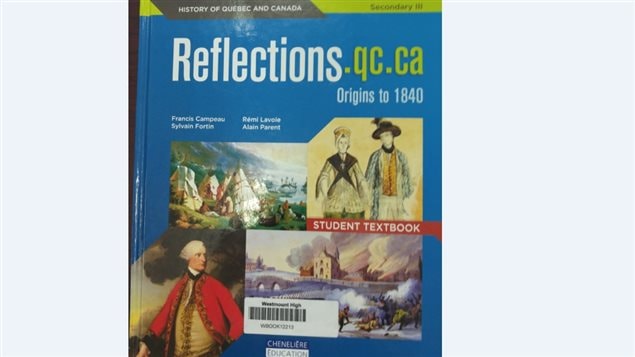 Who gets to tell the story of what happened in the past and why?

In the mostly French-speaking province of Quebec, the school history books were changed in the brief period when the separatist Parti-Quebecois was in power in the province. They asked Quebec nationalist historians to rewrite the books.

Many non-francophone groups in the province are upset about the results.

Rob Green is a history teacher at Montreal’s Westmount High School, and chairperson of the Committee for the Enhancement of the History Curriculum in Quebec.

Many Anglophone history teachers, along with aboriginal and immigrant groups were upset at the original course proposed.

It was supposed to improve on the existing history texts by being more inclusive with a look at how aboriginals (First Nations and Inuit), Anglophones, various immigrant communities, and Francophones all contributed to the building of Quebec.

Instead, Green and others say the PQ authorized history course developed in 2014, is narrowly focussed along “nationalist” lines. On the few occasions it mentioned “Canada”, and Anglophones in the province presented them as somehow being antagonistic to the French-Quebeckers aspirations. Green says the only positive reference to Anglophones was that they were “sort of” involved in the  early days of Quebec’s feminist movement.

They also complained there was little to no mention of the contributions of various waves of immigrants, nor that of aboriginal history in the province. Instead the course was narrowly focussed on the Quebec nationalist agenda.

Indeed, Inuit members of the Kativik school board in northern Quebec are angry that their input during consultations seems to have been ignored that input. In a press release this month they said the new course was “unacceptable”

In light of the many concerns about the texts, the provincial Liberal government which followed the PQ, said it would modify the history textbooks taking the concerns into account..

Rob Green and others say the changes were minor and the main concerns about the portrayal of Quebec’s history remain. When gropus continued to press for reforms, the Liberal government response was that the changes that needed to be made were made.

He says as a teacher in a classroom with Quebec students of various ethnic backgrounds this course renders many of them historically “invisible”, while demonizing another group.

Green says no-one is trying to replace ideologies, i.e., the Quebec nationalist viewpoint with a federalist one, rather they seek revisions that would go back to the intent of the original proposal to revise history books, that is one of inclusion.

A petition has been launched that is asking the government to immediately begin to work with school boards and stakeholder groups so that supplemental materials can be produced in the short term to correct some of the omissions in the textbooks.  A longer term goal is to undertake extensive public consultation in development of a eventual new and inclusive Quebec history course.