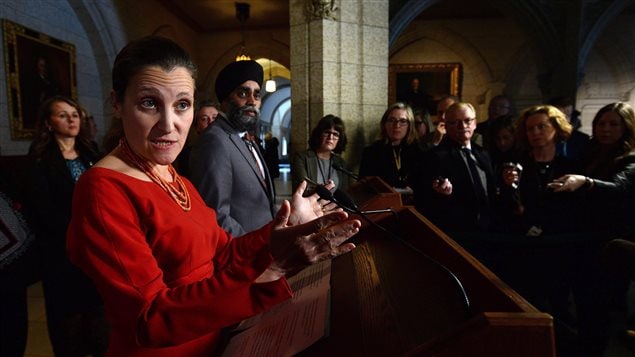 Foreign Affairs Minister Chrystia Freeland and Defence Minister Harjit Sajjan are going to be in Washington, D.C., today to discuss defence and trade issues in meetings with their American counterparts.

During their two-day visit to the U.S. capital, Freeland and Sajjan will meet with Secretary of State Rex Tillerson, Secretary of Defence James Mattis  and Wilbur Ross, Secretary of Commerce, “as well as with important stakeholders, to discuss Canadian priorities and cooperation between the two countries,” said a government statement.

Renegotiation of the North American Free Trade Agreement (NAFTA), trade disputes over softwood lumber and dairy, as well as Canada’s defence spending are expected to dominate the agenda of the meetings.

In an interview with CTV News on Saturday Freeland said she also hopes to meet with newly confirmed U.S. Trade Representative Robert Lighthizer “very soon,” and she expects him to trigger the NAFTA pre-negotiation process very quickly.

CBC News reported on Sunday that Canada’s long-awaited defence policy review will not be made public before Prime Minister Justin Trudeau faces allies at the NATO Leaders Summit in Brussels on May 25.

However, the Americans have been given a sneak peek at the new policy, according to reports by Murray Brewster, CBC’s senior defence writer.

Foreign Affairs Minister Chrystia Freeland will deliver a major speech shortly after the summit that will more clearly define the Liberal government’s vision, reported Brewster, citing an official with direct knowledge of the plan.

That will be followed closely by Sajjan’s policy review, which has been more than a year in the making and will set the future direction for the military, in terms of expectations, spending and equipment.

Canada’s military spending is likely to be one of the major points of discussion.

In response to Russia’s resurgence, particularly its aggressive policies in Ukraine, NATO leaders meeting in Wales in 2014 agreed to stop the cuts in defence spending and move towards spending 2 per cent of GDP on defence within a decade.

However, according to NATO estimates, Canada is spending just 0.99 per cent of its GDP on defence.

And its latest federal budget the Liberal government removed over $8 billion from the immediate equipment purchasing plans of National Defence.