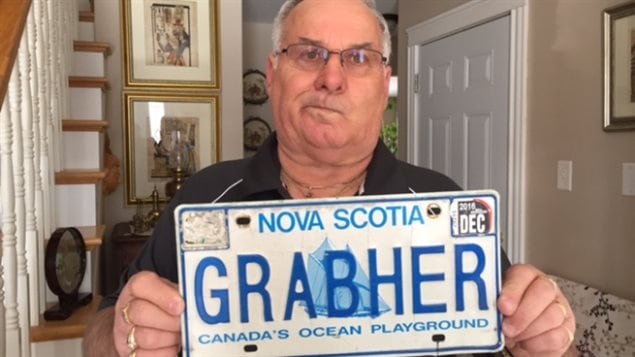 Lorne Grabher said he’s had his personalized licence plate for 25 years and it’s ridiculous the province has cancelled it. "It's my family name, not a 'slogan'"
Photo Credit: Yvonne Colbert/CBC

It began almost three decades ago without problem for decades, but now will end up in court.

It was 1991 when Lorne Grabher bought a so-called “vanity” licence plate bearing the family name as a gift for his father’s car.

Vanity plates are vehicle licence plates that can have a personalized message instead of the assigned government issued number and letter combination, and for which a person pays an additional fee.

When Lorne’s father passed away, Lorne kept the “GRABHER” plate for himself.

For 27 years all was well, until recently when someone made a single complaint to the Nova Scotia Registry of Vehicles (Registrar)  saying the plate promoted violence against women.

As a result Lorne received a note from the Registrar saying his plate was being withdrawn as of January this year.  The Registrar said the public couldn’t know it was the family name and so could can misinterpret it as a “socially unacceptable slogan”.

As that was denied the JCCF on Mr Grabher’s behalf has now applied to the Supreme Court of Nova Scotia, not for monetary damages, but merely seeking the reinstatement of the plate.

In his court application, Lorne Grabher seeks a declaration that the decision to revoke his licence plate violates his Charter section 2(b) right to freedom of expression, as well as his section 15 equality rights, and was furthermore “arbitrary, unreasonable, based on irrelevant considerations, an abuse of authority, a denial of procedural fairness, and otherwise invalid.”

“Mr. Grabher and his family were, and remain, deeply offended and humiliated by the cancellation of the plate, and the Respondent’s ongoing insult to their heritage and family name,” (JCCF application to N.S. court)

The application states in part that the Nova Scotia Registrar’s action violates his Charter section 2(b) right to freedom of expression, as well as his section 15 equality rights, and was furthermore “arbitrary, unreasonable, based on irrelevant considerations, an abuse of authority, a denial of procedural fairness, and otherwise invalid.”

In addition to the court action, the JCCF is getting 10 x 23 cm bumper stickers (@ $5 ea) made in support of Mr Grabher which will be sold to help defray court costs.

It should be noted that Mr Grabher’s son , Troy,  who  lives in the western prairie province of Alberta  also has a personalized licence plate “Grabher”, which so far has not had any complaints.