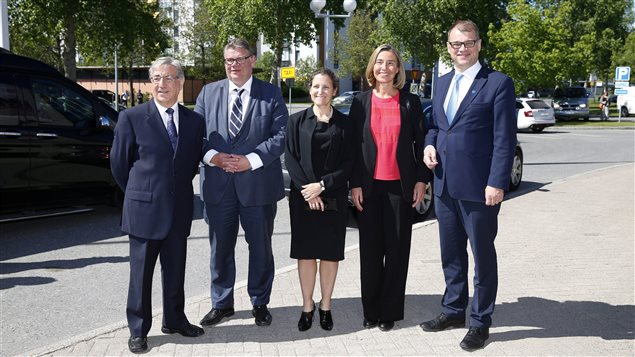 Canadian Foreign Affairs Minister Chrystia Freeland was in Finland on Thursday to participate in an European Union high-level meeting focused on Arctic environmental challenges and sustainable development. But Freeland also used her trip to northern Europe to lobby for faster ratification of a key Canada-EU free trade deal.

Okalik Eegeesiak, Chair of the Inuit Circumpolar Council, is also attending the meeting, which concludes on Friday. She will represent the international interests of Inuit in Canada, Greenland, Chukotka (Russia) and Alaska.

They discussed the importance of Canada-EU cooperation on various matters, including the ratification of the Canada-European Union Comprehensive Economic and Trade Agreement (CETA), working constructively with the U.S. on climate change, and Canada’s role as a key partner for European and international peace and security, Jean said.

“Canada and the EU have shared values and a commitment to people in the Arctic region,” Freeland said in a statement. “There are excellent opportunities to advance our common priorities, including action on climate change and support for Indigenous peoples, science, technology and innovation.”

Freeland’s interest in Arctic affairs is very encouraging, said Heather Exner-Pirot, the managing editor of the Arctic Yearbook, a Research Fellow with the EU Arctic Forum, and a member of the Board of Advisors for the Arctic Institute.

“Canada is probably going to release a new Arctic foreign policy in the fall,” Exner-Pirot said. “So, actually I’m very encouraged that she’s going to be pretty well-informed and have a good idea of the region and the politics before that comes out.”

The event, titled “A sustainable Arctic – innovative approaches,” aims to boost the dialogue on the EU’s Arctic policy and development of the Arctic regions of the EU, organizers said.

Finland, which in May assumed the two-year chairmanship of the Arctic Council for 2017–2019, wants to draw special attention to the development of the Arctic regions of Europe, in part by making use of the EU’s financial instruments, Finnish foreign affairs officials said in a statement.

Participants of the event, which include government officials, industry, researchers, and Indigenous and local community representatives, discussed innovative and sustainable solutions for the development of the economy and infrastructure, while taking account of the Arctic environment and the perspectives of the indigenous peoples, people living in the region and the international community, organizers said.

During the EU Arctic policy event, Freeland gave a keynote address on science, innovation and cooperation as ways to address the challenges facing the Arctic, most notably, climate change, Jean said. She then participated in the panel discussion, “The Arctic is local and global – increasing expectations.”

The focus on innovation is a relatively recent and a very welcome addition to the agenda of the meeting in Oulu and in discussion about Arctic issues in general, Exner-Pirot said.

Collaboration on technological innovation, especially for infrastructure, materials for roads, food systems, broadband communications, water and waste treatment systems is especially important in the Arctic because it allows for economies of scale, Exner-Pirot said.

Freeland also used the opportunity to drum up support for CETA, which she led to successful conclusion in her previous capacity as Canada’s international trade minister.

Of 28 EU member states, so far only Latvia and Denmark have ratified the deal.

“Our partnership will grow with CETA, which will have significant benefits for citizens of both Canada and the EU,” Freeland said.

Freeland also had a meeting with her Norwegian counterpart Borge Brende to discuss “shared interests” and CETA.

Always pleased to have time to discuss ??+?? shared interests with Foreign Minister @borgebrende, incl #CETA and the #Arctic. #OsloForum pic.twitter.com/Jio9YQCyJc