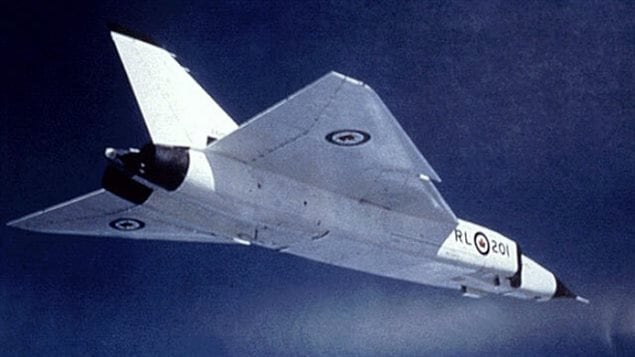 Canadian’s national pride was shattered when the government ordered the sleek Arrow programme cancelled and everything including the six planes, destroyed. It was expected that with the Canadian engine it could attain Mach 3, unheard of at the time. One of the very few things remaining are the test models at the bottom of Lake Ontario
Photo Credit: Department of National Defence

It was a world-leading state-of-the-art jet interceptor.

Indeed it seemed Canada would become a world leader in aerospace with the development of the CF-105 Avro Arrow, and its powerful new Canadian designed engines.   With the first planes completed and flown, and with results exceeding expectations, the programme was suddenly cancelled, but not just cancelled, everything was ordered brutally destroyed; plans, tools, parts, and the completed planes themselves were to be cut up, destroyed, scrapped and everything made to disappear.

It has led to decades of speculation about conspiracies to keep Canada out as a competitor in the aerospace industry.

The only thing that might remain are the nine large scale test models at the bottom of Lake Ontario.

Now a concerted effort is being made to locate those models. David Shea is with the Newfoundland and Labrador-based company that will conduct the underwater research. He is the vice-president of engineering for Kraken Sonar.

Kraken Sonar was chosen for the project for its work in searching for Franklin’s lost ships in the Arctic. The search for the Arrow models involves three Canadian museums, a variety of sponsors, and the military.

The Arrow has been the subject of bitter controversy for decades, and is to this very day. It is a case of “what might have been”.

It was the height of the Cold War, and the Arrow was designed to intercept high-flying Soviet bombers that might attack the North American continent from over the Arctic.

The jet would fly faster, farther, and higher than any competitor then  available.  It was quite simply going to be the best interceptor ever, especially when equipped with the new Canadian designed engines.

Even with temporary American engines, the first prototypes were exceeding all expectations. It would have been the best of its kind and was a source of tremendous national pride.

Not only that, but it was a beautiful sleek aircraft.

But the programme was expensive. The government was greatly disturbed by the ever increasing costs.  It also appeared that it would be a difficult sell to other countries, like the U.S., U.K. or European countries eager to keep their own aerospace companies going.

By 1959, the federal government decided Canada simply couldn’t afford the  programme and abruptly cancelled on February 20th, forever after known as “black Friday”.

Inexplicably the order was also given to destroy everything connected to the programme.

Not only was the abrupt cancellation shocking in itself, but the savage destruction of planes and all related material was completely incomprehensible.

Was it a conspiracy? Did the Americans convince the Prime Minister that in the missile-age such manned fighters were obsolete? Did they deliberately promise top weapons systems and then renege, pushing costs up? Did they want to hire the brilliant engineers for their own programmes (which did happen). Or was it the fault of the top Canadian air force staff which kept changing specifications and as such pushing costs up.?

Whatever the case, one of the few things remaining might be the nine models designed to test the designs. These scale models were fired from rockets to push the models into supersonic speeds during which onboard sensors would relay information back to the ground.

The models were fired over Lake Ontario, and left on the lake bottom.

Previous searches for them have been carried out be a variety of “Arrow-heads”, but without success.

Kraken Sonar has new sophisticated technology which they feel will be able to locate the models.  They have also done extensive examination of records and with calculation of angles and speeds, believe that others may have been looking in the wrong area.

The search of some 64 square kilometres of lake bed begins this week in depths ranging from five to 50 metres deep.