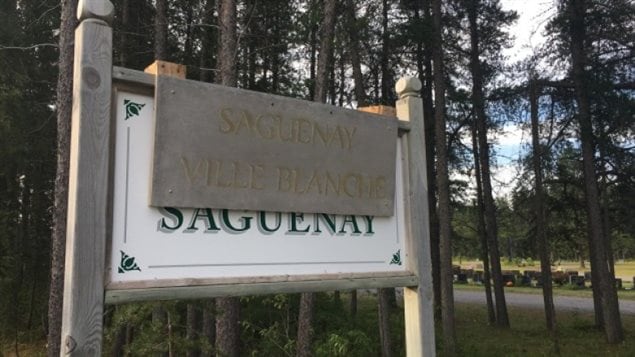 Almost six months after the horrific attack on a mosque in Quebec City in which six Muslim worshippers were killed and a day after Quebec’s provincial government announced that it would hold public consultations in September to examine discrimination and racism in the province, authorities and residents in two Quebec communities were forced to confront two racist incidents on Friday.

In the small town of Saint-Honoré in the Saguenay region, a wooden sign with the words, “Saguenay, Ville Blanche” (“Saguenay, White City”) was posted at the entrance of a cemetery.

Meanwhile, in the Eastern Townships city of Sherbrooke, anti-immigration stickers appeared in the downtown core.

The stickers were distributed by the Federation des Quebecois de Souche reading, “They will not silence us” and “Minorities on our land: Never!”

In response, a local student association distributed its own stickers, denouncing racism and Islamophobia.

The incidents came near the end of trying week for Muslims living in Quebec.

Last Sunday, residents living adjacent to a proposed Muslim cemetery in the town of Saint-Appollinaire, south of Quebec City, voted by 19-16 against allowing the cemetery.

Thursday’s announcement of the public consultations on discrimination was made by Kathleen Weil, Quebec Minister of Immigration, Diversity and Inclusiveness at a news conference when she was accompanied by Tamara Thermitus, president of the Quebec Human Rights Commission, which will organize and lead the consultations.

As part of the consultations, which will begin in September, Quebecers will be able to fill out a questionnaire online or submit a brief to the government and non-profit organizations across the province.

Participants will be asked to share their experiences of discrimination or racism, or offer solutions to the problem.