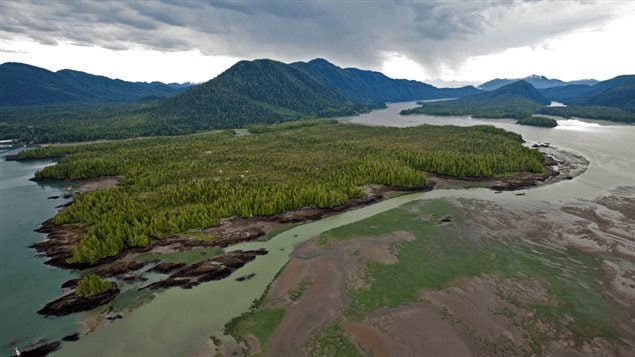 Lelu Island where Petronas wants to create a huge LNG port. Environmentalists say its a critial salmon habitat, while First Nations say it’s their territory and they haven’t been consulted. The project has been stalled by an environmental challenge
Photo Credit: Brian Huntington

A huge project set to develop a 900 kilometre gas transmission line and export port on the British Columbia coast has hit a legal roadblock.

The provincial government had approved the Prince Rupert Gas Transmission  Line which would move fracked gas from north-eastern BC to the proposed giant LNG export terminal on Lelu Island near Prince Rupert.

The terminal would be built and operated by Pacific Northwest LNG, majority owned by Petronas of Malaysia

The National Energy Board (NEB) had dismissed a claim that the NEB conduct a full environmental review on the basis that the pipeline was entirely within British Columbia, so it was a provincial determination.

Mike Sawyer of Smithers B.C. challenged that decision and an appeals court agreed that the NEB was wrong in dismissing Sawyer’s request for an environmental review. Sawyer had claimed that the project was in fact under federal jurisdiction thereby requiring examination by the NEB.

Speaking for a unanimous tribunal, Mr. Justice Donald Rennie said the NEB made significant constitutional law errors in dismissing Mr. Sawyer’s application. He said the Board merely looked at the location of the pipeline within BC and failed to consider that the entire purpose of the pipeline is to move gas for export.

Sawyer said, “I’m convinced that PRGT is just one part of a massive natural gas export scheme that is clearly within federal jurisdiction and needs federal approval to proceed.”

He then added, “I don’t think we should be exporting our natural resources, particularly energy resources, if we haven’t determined what’s in our public interest”.

TransCanada pipelines also has 60 days to launch an appeal to the Federal Court of Appeal,