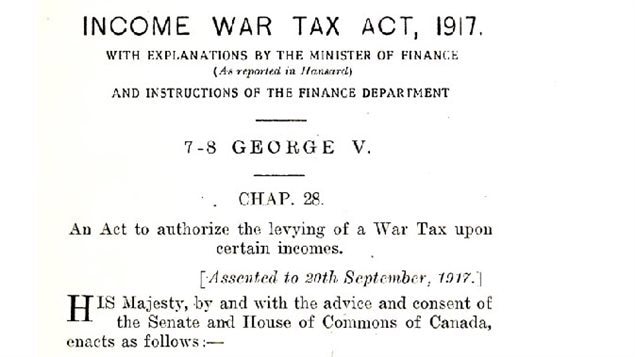 The original tax act of 1917 to finance the war effort, all eleven pages of it. Finance Minister White hoped it would be a temporary tax and so insisted it be called a *war tax* so that once the war ended, it might be *revisited*. Instead, in 1921 the government added a *sales tax*, and more over the years since..
Photo Credit: via vimyridgehistory.com

July 25, 1917. The First World War was at its height, having dragged on for three years grinding up lives, resources, and money.

On July 25, the federal government introduced a “War Income Tax” in Parliament to help replenish the drained federal coffers. The “Income War Tax Act” would be passed on August 17th, and with Royal Assent, come into effect in September 20th.

It was somewhat of a political gesture as well in that only days before the government announced conscription, which would send more young men to war.

Conscription (obligatory military service) was a highly controversial move, and the fact that wealthier Canadians would have to do more to contribute to the war was not totally unwelcome, although there certainly was opposition.

While it is generally believed that personal income tax was to be a temporary measure and often was touted as such, in truth the finance minister, Sir Thomas White has suggested that it be “revisited” after the war.  However, even at the time, other politicians said that once embarked upon, such a tax would likely remain for years to come.

SIR THOMAS WHITE – Minister of Finance (Leeds): Mr. Chairman, I desire today to lay before this committee proposals for a national measure of income taxation. Hitherto we have relied upon duties of customs and of excise, postal rates and other miscellaneous sources of revenue. Canada has been, and will continue during the lifetime of those present today, to be a country inviting immigration. I have, therefore, thought it desirable that we should not be known to the outside world as a country of heavy individual taxation.

We are, however, confronted with grave conditions arising out of the war. The time has arrived when we must resort to direct taxation. I am confident, Mr. Chairman, that the people of Canada, whose patriotism during this war has been so often and so nobly proven, will, in light of present conditions, which call for it, cheerfully accept the burden and the sacrifice of this additional taxation”.

We cannot see very far ahead in these days. We do not know how long this war will last. We do not know what the attitude of the people of this country will be upon the many questions, social, industrial, financial and fiscal.

Therefore, I have placed no time limit upon this measure but merely have placed upon Hansard the suggestion that, a year or two after the war is over, the measure should be reviewed by the minister of finance of the day, with a view of judging whether it is suitable to the conditions which then prevail.

But since that time, taxes and methods of taxation have dramatically increased, with the government creating new methods and areas to tax.

The original 11-page tax act, has ballooned into a document of over 3,000 pages.

In 1918, a person required to pay taxes would have contributed the equivalent of about 14 dollars in today’s terms, whereas in 2016 that same person would be paying over $4,000.