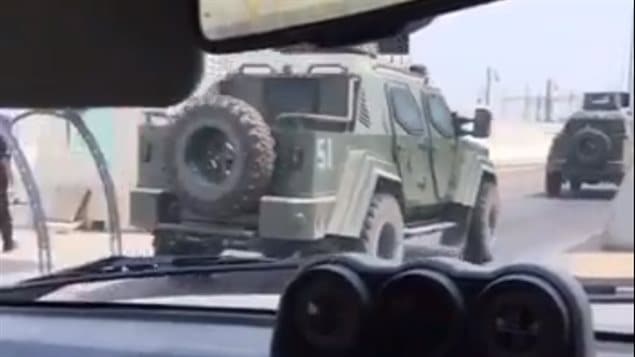 A still image from a video posted on Twitter on Aug. 5, 2017, shows a column of Canadian-produced Terradyne Gurkha APC operated by Saudi Special Security Forces in the besieged city of Awamiyah in Saudi Arabia’s Eastern Province.
Photo Credit: @SahatAlbalad/Twitter

As Saudi forces celebrate their victory over armed militants in the Shia-populated city of Awamiyah, human rights groups, opposition politicians and government officials in Ottawa are trying to find out whether the Canadian-made armoured vehicles deployed by the Saudis were used to commit human rights abuses and what that would mean for Canada’s lucrative defence ties with the ultra-conservative kingdom.

Radio Canada International reported in July that Canadian armoured personnel carriers (APCs) produced by Terradyne Armored Vehicles based in Newmarket, Ontario, were deployed by the Saudi security forces during the fighting in Awamiya in Saudi Arabia’s restive Qatif region that has killed at least 20 people and forced the majority of the city’s 30,000 residents to flee.

The controversy with the use of Canadian Terradyne APCs comes barely a year after the Liberal government approved a $15-billion megadeal to supply Saudi Arabia with advanced Light Armoured Vehicles (LAVs) produced by another Ontario-based manufacturer.

RCI also reported last week about a 9-second video purporting to show LAV 25 vehicles produced by General Dynamics Land Systems in London, Ont. being deployed by Saudi forces. However, RCI has been unable to independently confirm that the video was in fact shot in the vicinity of Awamiyah.

There are no doubts, however, that Terradyne Gurkha APCs were used by Saudi forces in Awamiyah, said Adam Coogle, Middle East researcher with Human Rights Watch.

The revelation that Canadian weapons may have been used in support of operations that allegedly targeted civilians have prompted the opposition and human rights groups to call on the Liberal government to suspend all weapons transfers to Saudi Arabia.

Canadian officials are working “with a real sense of urgency” to investigate the reports that Canadian-made military vehicles were being used by Saudi security forces in Awamiyah, Foreign Affairs Minister Chrystia Freeland said Monday.

All throughout the fighting in Awamiyah, video footage posted by Saudi soldiers and Saudi Shia activists shows the Saudi troops using Terradyne APCs.

Coogle, however, said he has not seen any video evidence of Canadian APCs, which can be armed with machine guns mounted on the vehicle’s turret, firing their weapons during the fighting.

It is the first time that use of the Canadian weapons has been traced to the Eastern Province, Coogle said.

“It’s something that we suspect was going on for a while but now we know for sure,” Coogle said.

Given that the Saudi forces had encountered fierce armed resistance, the use of armoured personnel carriers to protect their troops was probably appropriate, Coogle said.

“At the same time we also heard many-many accounts from individuals and residents of Awamiyah who claim that they believe that Saudi security forces used excessive force and in fact put residents at risk,” Coogle said.

A three-year-old boy succumbed to his injuries on Wednesday following an incident that had occurred on June 12, when the boy’s uncle and his family were shot at by Saudi security forces from an armoured personnel carrier while they were driving by Awamiyah’s main police station, Coogle said.

“Given all that, we do have serious concerns about how these vehicles were used and how they conducted this operation,” Coogle said. “We do think they should carry out a very serious investigation to determine whether or not police and security forces used excessive force, excessive force that in fact killed residents, people who were not engaged in the fighting, and if so, they need to hold those responsible to account.”

The Saudi security forces operate a number of armoured personnel carriers produced by different manufacturers and it’s difficult to ascertain whether Canadian-made APCs were used to commit any specific human rights abuses.

Thorn in the side of Riyadh

Ali Al-Ahmed, director of the Washington-based Institute for Gulf Affairs who hails from the city of Safwa just north of Awamiyah, said the city and the surrounding region of Qatif have long been a thorn in the side of the Saudi regime.

“Qatif is different from other Shia areas,” Al-Ahmed told RCI in a recent phone interview from Washington D.C.. “It has a special independent culture and in terms of political sophistication this area takes the cake: this is where the largest number of political movements were born.”

Almost all of the protests in the tightly controlled monarchy originate in Qatif, including the large protests that shook the kingdom in 2011 during the so-called Arab Spring, he said.

The latest round of confrontation began when the Saudi government moved in to demolish the historical Musawara neighbourhood in Awamiyah, Coogle said.

“The reason cited were health and safety issues, which I think are probably legitimately true,” Coogle said. “But the neighbourhood also had a reputation for sheltering individuals who were wanted by the Saudi government for protest-related crimes, around the protests of 2011 and 2012.”

When the Saudi forces came in on May 10 to begin the demolition work in the largely emptied ancient neighbourhood of Musawara, they encountered armed men who attempted to prevent them from demolishing the 400-year-old neighbourhood, Coogle said.

The clashes and confrontations between police and these armed Shia men went on for months until August 8, when the Saudi government declared that they had finally flushed the gunmen out of Musawara, he said.

The fighting escalated dramatically on July 26, when police and special forces moved in and sealed off all entrances to Awamiyah.

“They basically made it very difficult for civilians to leave their homes,” Coogle said. “Civilians were caught in the crossfire. I spoke to five residents who said they were scared to walk on the streets, that they knew that anyone who walked on the streets would be shot at.”

One person told him that he was shot at by a Saudi armoured personnel vehicle in a neighbourhood on the opposite side of the city, far from the fighting in Musawara.

“So there is no questions that civilians inside Awamiyah had had a very-very difficult situation over the last weeks and months,” Coogle said.

The Saudi authorities have not released any numbers of civilians killed during the operation in Awamiyah, however they reported that eight police officers and four special forces soldiers were killed fighting the Shia militants in the city, Coogle said.

Saudi Shia activists reported 23 civilians and five to six militants killed in the operation, he said.

Ali Adubisi, director of the Berlin-based European Saudi Organization for Human Rights told Radio Canada International (RCI), that between 20 and 30 residents have been reported killed in Awamiyah.

The scars inflicted on Awamiyah by fighting and the demolition are much more obvious and easier to see.

“Before and after” satellite pictures of Awamiyah posted by Saudi Shia activists document the scale of destruction brought on by the fighting and the demolition work.

Human Rights Watch has done its own satellite analysis without relying on images circulating on social media, Coogle said. That analysis shows widespread destruction in the Musawara neighbourhood, he said.

“Residents have told me that essentially the entire main street, which was essentially all businesses, is pretty much destroyed, most of those businesses are heavily damaged by the fighting that has gone on,” Coogle said.