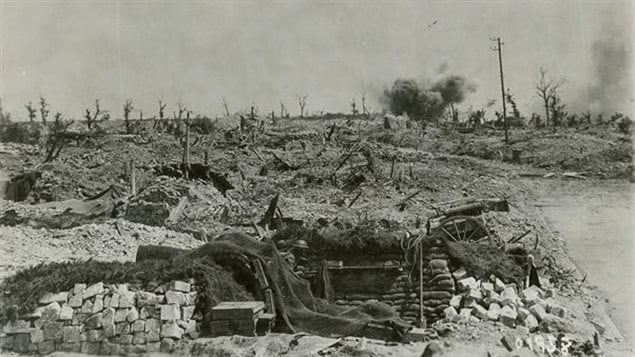 A German shell bursts in a blasted landscape near a Canadian gun pit at Hill 70, possibly as a prelude to one of the many attempted counterattacks. The howitzer has a net draped over it, presumably to conceal it from possible enemy spotter planes. Part of the wheel and gun trail can be seen
Photo Credit: Canadian War Museum 19920085-814

100 years later, finally a memorial to a forgotten battle

One hundred years ago this week, a geographic mound outside the French city of Lens was the site of a major strategic battle of the First World War.

Known as the Battle of Hill 70, it was a  10-day struggle from August 15-25 that once again saw Canadian planning and determination win the day.

Strangely this major victory, an entirely Canadian one, remained largely forgotten and unlike most other major battles in the First World War there was nothing to mark the site of the sacrifice of the dead and wounded.

LCol(ret) Mark Hutchings thought that was wrong and began a campaign to erect a memorial to those who fought and died there.  That project grew and now a memorial and park are to be officially opened to the public on Tuesday August 22.

I reached Mr. Hutchings in northern France via mobile phone.

Although the success at Vimy Ridge is seen as a major Canadian victory for the Allies, overall command was British, and large numbers of British forces were also involved.

Four months after that amazing success, Canadian General Arthur Currie, commander at Vimy, had next been ordered to plan an attack on the coal and rail centre of Lens , a short distance to the north, as a diversion to a larger British operation elsewhere.

As he had done before Currie personally visited the area to assess the situation. He quickly realised that such an attack would result in the slaughter of his troops and did something unheard of, he demurred.  Instead he convinced the senior command that Hill 70 nearby at Loos-en-Gohelle overlooking Lens was the more sensible strategic objective.

Hill 70 presented a very similar situation to that of Vimy Ridge. They would be attacking a fortified hilltop, and as at Vimy, an objective where previous British and French attempts had failed. This time it would be an entirely planned, led, and carried out by Canadians.

The Canadians took the Hill and held it against several days of repeated counter attacks, succeeding in causing massive German losses.

An incredible six Victoria Crosses were awarded to Canadians as a result of the battle.

It was a huge victory, and another major step in Canada’s march towards international recognition as a distinct independent nation.

Hutchings goal to erect a memorial caught on with a large group of supporters who were also surprised there was no recognition of this event. The multi-million dollar project has been funded entirely through private donations. Many experts and professionals have also contributed hundreds of hours of pro-bono work and advice.  Hutchings, who is the chairman of the non-profit Hill 70 Memorial Project also notes that all members of the society are volunteers and 100 per cent of monies goes toward the memorial.

He notes there is still work to be done such as adding a wheelchair accessible walkway and donations to the memorial can be made through the website.