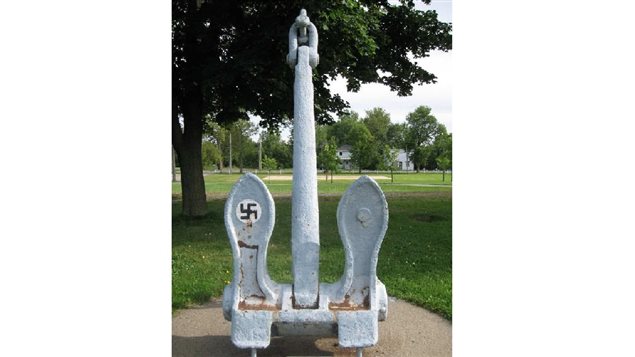 An old anchor near a maritime museum west of Montreal displays a controversial swastika. Many locals and others thought the anchor was a WW2 German relic due to the swastika which was also often mistaken for the hated Nazi ’hakenkreuz’. That 'mistake' was not helped when the city repainted the anchor recently highlighting the image in black with a white circle behind it.
Photo Credit: Corey Fleischer Facebook

It’s not Nazi, it’s not even German

An old ship’s anchor mounted in a park in a Quebec town just west of the island of Montreal, has caused a bit of a kerfuffle. The anchor bears an embossed swastika on one of it’s flukes.

Although the anchor has been there for many years, recently someone complained to a Montreal man known for removing hate symbols. Corey Fleischer runs a power washing company but also has a personal pro-bono campaign to erase racist and other hate graffiti spray painted on buildings around the city.

When informed of the swastika, he went to the community of Pointes-des-Cascades in Vaudreuil-Soulanges and the Parc des Ancres (anchor park) where the old anchor sits near a museum dedicated to the maritime history of the St Lawrence and nearby Soulanges Canal.

The city had painted the swastika black with a white circle behind it to highlight it, and Fleischer tried to erase it.

However, although the paint came off, the symbol as part of the original casting, remained.  Because of that, Fleischer painted a black circle around it to block it out.

Meanwhile, the local mayor saw him and told him to stop, while calling police for what he saw as vandalism. Fleischer and others say the mayor is wrong to have stopped him, and that Nazi symbols have no place in society, adding he’d be back if the city repainted it.

Many people in the community and elsewhere mistakenly believe this and other similar old anchors are German and of Second World War origin.  Many media reports of this latest incident also mistakenly identify the anchor as a German war relic.

In fact it is British and predates the war.

In the late 1800’s and into the twentieth century W.L.Byers of Sunderland, England was a supplier of large ship anchors and chains.

He was apparently fascinated by the swastika, as were a great many people and organisations of the time, by this symbol found on pottery unearthed by archaeologists at Troy and which is believed to be an ancient sign both there and in India for good luck and auspiciousness,

Byers made the symbol the logo for his company and had it cast into the anchor flukes of his popular stockless anchors well into the twentieth century, prior to the Nazi use and slight variation of their now universally despised “hakenkreuz”.

Byers anchors were purchased for a great many large ships, both military and cargo, built and sailed around the world.  The company stopped using the logo when the Nazi party adopted their variation in 1920.

Many parks in locations around the world now have old Byers anchors on display which include the swastika.

It is not clear what further action may be taken in the case of the Vaudreuil park anchor, which is not German, and the former company logo which is no way connected with the Nazi variation.

Corey Fleischer  when contacted by a Radio-Canada reporter Hugo Lavoie, said that the fact that the swastika and anchor are not German and not Nazi, is irrelevant. The journalist was also told by the local mayor that since the story became widely reported he and the town have been inundated with hateful mail and phone calls from people who are also unaware of the real story.