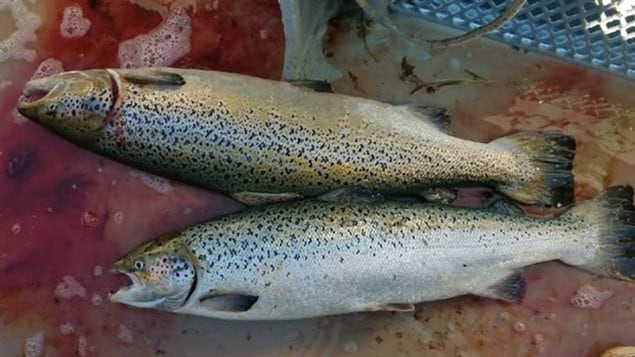 Commercial fisher Ellie Kinley of Lummi Island near the Cooke fish pens on Cypress Island, posted these pictures of Atlantic salmon she said were caught after the farmed fish pen broke, releasing thousands of the invasive species into Pacific waters. There is no way to confirm if the fish pictured here are the fish that escaped.
Photo Credit: Elie Kinley via CBC

It is exactly what environmentalists campaign against; a massive escape of farmed salmon into the wild.

Of greater concern, these are Atlantic salmon which were being raised in pens in the Pacific and as a non-native species might constitute the equivalent of an invasive species which could therefore damage or change the native ecology.

The giant pen was one of several off the coast of Washington State in the Puget Sound, but owned and operated by Cooke Aquaculture of Canada.

The collapsed pen contained some 305,000 fish, but it is not known how many escaped, although the number of four to five thousand is being mentioned.

Cooke says unusually high tides and strong currents resulting from the solar eclipse were to blame for the pen being ripped from its anchors.

It also is playing down concerns that the fish will pose a threat to other species saying that having been used to pellet feeding in the pen, they are more likely to be prey than predators.

John Volpe a professor in the School of Environmental Studies at the University of Victoria, is not so sure. He says the effects of such an escape are unknown as so little research is being done.

Quoted in the CBC he says there is evidence of Atlantic salmon reproducing in British Columbia coastal waters. He also says there’s a “chill” on research into the issue in Canada.

Kurt Beardslee, executive director of the Wild Fish Conservancy in Washington was at the site and was reported in the Times-Colonist news as saying cleanup efforts were minimal, adding he doesn’t believe the solar eclipse had anything to do with the collapse adding that pen, one of several, had earlier problems and was recently repaired.

The Washington Department of Fish & Wildlife is encouraging local recreational and commercial fishermen to catch as many of the Atlantic Salmon as possible.

In Canada, the government agency Fisheries and Oceans Canada (DFO) is asking Canadians in the area who catch an Atlantic salmon to keep it and report it to them via the Atlantic Salmon Watch Program hotline. They may be asked to donate it for research.

Expansion of penned salmon and protest

The collapsed pen and fish escape comes even as Cooke plans to open more pens in the region.

Wild fish proponents are planning a protest flotilla against the expansion plan and fish farming on September 16 off Bainbridge Island.