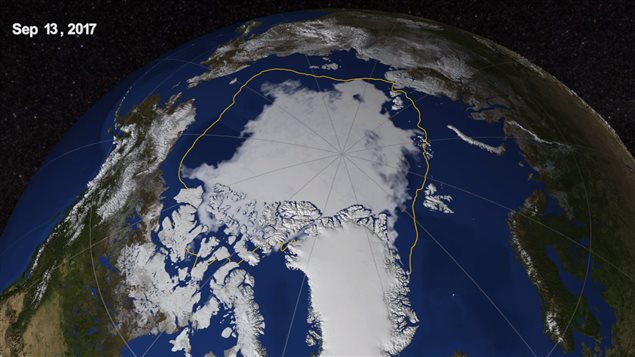 Polar sea ice extent in the Arctic has reached its summer minimum for the year according to data from NASA.

The minimum was reached on September 13, and NASA says it’s the eighth lowest on record.

This is some 1.58 million square kilometres below the 1981-2010 average minimum extent.

With this recent news, NASA also noted that ice extent in the Antarctic reached a new record maximum coverage.

According to NASA’s Claire Parkinson, a senior scientist at NASA’s Goddard Space Flight Center, these differences reflect “the diversity and complexity of Earth’s environments”, and say it’s a microcosm global climate change.  “The planet as a whole is doing what was expected in terms of warming. Sea ice as a whole is decreasing as expected, but just like with global warming, not every location with sea ice will have a downward trend in ice extent,” Parkinson said.

He also noted that weather conditions this year were not particular noteworthy with a mild summer which was even cooler than normal in some regions. “ “The fact that we still ended up with low sea ice extents is because the baseline ice conditions today are worse than the baseline 38 years ago”, he said

Scientists point out that the two poles react differently to climate changes as the Arctic is an ocean surrounded by land, while the Antarctic is a continent surrounded by ocean.