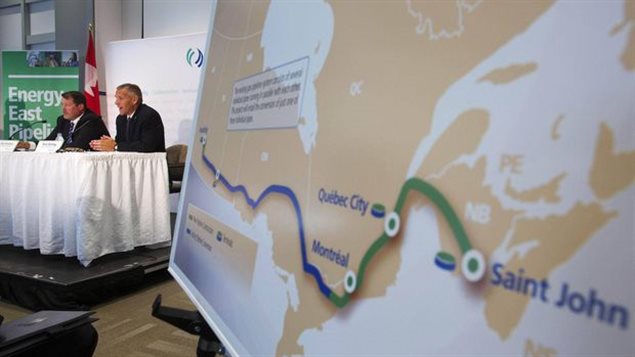 Energy East was the proposed 4400 kilometre pipeline that was the bringer of prosperity to some parts of Canada, and a potential disaster to other regions.

When Trans Canada, the company behind the project, announced on Thursday October 5th, that it was cancelling the pipeline plan, the reactions across Canada were strong and contrasted.

The mayor of St. John, New Brunswick, Don Darling in the province where the pipeline was to end, described the news as “a devastating blow for our community.”

He cited the $5 miilion (Cdn) in annual revenue the pipeline would have created along with jobs in construction and maintenance, and described it as “a lost opportunity.”

Calgary, Alberta mayor, Naheed Nenshi was disappointed with the news of Trans Canada’s decision, but in Montreal, Quebec, mayor Denis Coderre was elated with the announcement.

Coderre described it as an “enormous victory”, saying there a was a problem with the company’s attitude from day one.

The pipeline was intended to carry 1.1 million barrels of crude oil a day, east from the prairie provinces of Alberta and Saskatchewan across Manitoba, Ontario and Quebec, to New Brunswick

The route was to pass through Montreal, then along the St. Lawrence River through Lévis, up to Cacouna before veering east.

Originally announced in 2013 when the price of oil was still in the $90 (Cdn) range, many observers say with current prices hovering around $50 (Cdn) the project no longer made economic sense.

Andrea Harden-Donahue, is the Energy and Climate Justice Campaigner with the environmental and social activist non-profit group, the Council of Canadians.

“It would have put 5 million Canadians drinking water at risk, it would have released 32 million tonnes of carbon pollution into the air just filling it, let alone burning the oil.” Harden-Donahue says of the pipeline, “It was a disaster for the climate.”

When asked about the role of opposition to the project, versus the flat price of oil, Harden-Donahue credits the 100,000 messages to the National Energy Board (NEB), demanding climate tests.

The NEB is the independent economic regulatory body created by the Canadian government to oversee “international and inter-provincial aspects of the oil, gas and electric utility industries” according to its website.

Many in First Nations communities were vocal in their opposition to the pipeline.

Mohawk Kanesatake Grand Chief Serge Simon, of the community near Montreal, led the resistance, even as Trans Canada made valiant efforts to consult with communities along the pipeline path.

Simon was explicit in his lack of trust in the company to provide adequate safety oversight and didn’t believe the promise of jobs.

The Treaty Alliance Against Tar Sands Expansion is an anti-pipeline group that Simon co-founded in 2015.

There was very little benefit to the province, and in the wake of the Lac Megantic oil train disaster, the transportation of oil was under the microscope.

Even many people in New Brunswick were in opposition to the pipeline and the storage tanks that were to built.

Harden-Donahue says, a spill in the Bay of Fundy would have put thousands of jobs in jeopardy in the fishing and tourism industries.

“Tar sands oil is not like other oils, it would sink and that could present real risk,” Harden-Donahue says.

The Canadian military was also concerned about the prospects of an oil spill on the Ottawa River near their Petawawa, Ontario base.

“This image of Energy East being a no-brainer, a nation-building project, bringing oil from parts of Canada, from Alberta and Saskatchewan to Atlantic Canada, that was a myth created to help build support for the project, and the reality of the project just didn’t back it up,” she says.

Meanwhile, age-old regional tensions between east and west in Canada are flaring.

It is a very bad day for the West,” he continued. “Something needs to change. For the West to continue on like this in our federal system is the equivalent of having Stockholm syndrome.”

Lisa Raitt, Deputy Minister of the federal oppostion Conservative party, spoke for many in Alberta charging that Ottawa’s climate-change policies are penalising Western crude producers while refineries in Quebec and New Brunswick import oil from Saudi Arabia and Venezuela, countries that don’t have greenhouse gas regulations.

Mr. Trudeau “forced Canadian oil companies to comply with standards that are not required for foreign companies,” Ms. Raitt said.

Meanwhile, the Trans Mountain Pipeline, to take crude oil west over the Rockie mountains to the port in Vancouver on the British Columbia coast, did get federal government approval, but it is held up in court being challenged by the provincial government of British Columbia, environmentalists and First Nations.