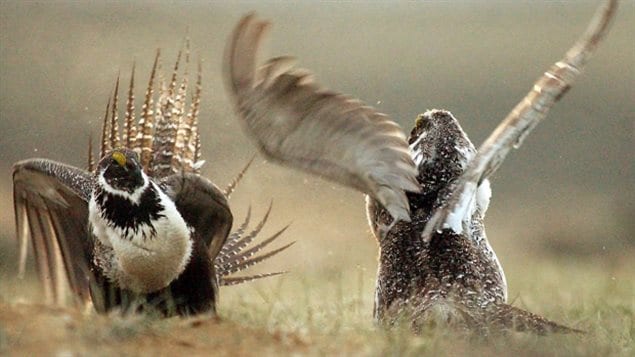 The greater-sage grouse is a large bird that lives at ground level on the western prairies.
Photo Credit: Jerret Raffety/Rawlins Daily Times via AP

There are hopes the Calgary Zoo can boost the tiny population of greater sage-grouse left in Canada in a brand new breeding facility it has just opened. There are fewer than 400 of these birds remaining as human development has led to the destruction of much of their western, prairie habitat.

In 2016, eggs were collected from Grasslands National Park in the neighbouring province of Saskatchewan and from birds relocated from the State of Montana. There are now 64 sage-grouse at the Calgary Zoo.  The goal is to continue to breed them and to eventually reintroduce birds into the wild.

‘An iconic part of our Canadian heritage’

“I see the greater sage-grouse as an iconic part of our Canadian heritage; a key component of our prairie ecosystem,” said Dr. Axel Moehrenschlager, the zoo’s director of conservation and science in a news release. “Our new facility, the Snyder-Wilson Family Greater Sage-Grouse Pavilion, will help to build a strong, wild population for this species.”

One of many species in trouble

The breeding pavilion spans 2,880 metres and will have cameras to monitor and provide information about best breeding practices. The greater sage-grouse is one of 189 plant and animal species in western Canada that are listed under the national Species at Risk Act. The species was designated as endangered by the Committee on the Status of Endangered Wildlife in Canada in 1998.