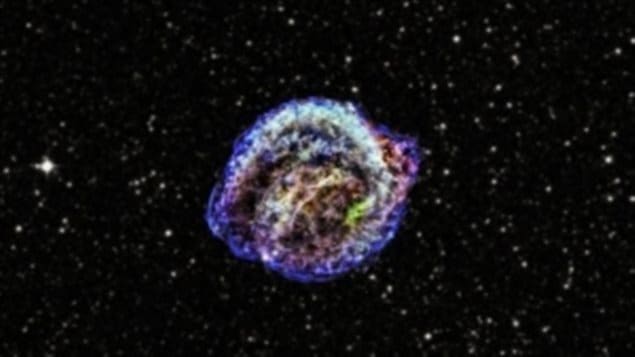 This is the remnant of Kepler’s supernova, the famous explosion that was discovered by Johannes Kepler in 1604. Catastrophic cosmic events such as supernovas are thought to generate high-energy neutrinos and cosmic rays.
Photo Credit: X-ray: NASA/CXC/NCSU/M.Burkey et al; Infrared: NASA/JPL-Caltech

Neutrinos: Towards discovering the secrets of the cosmos

“Whenever anything cool happens in the universe, neutrinos are usually involved” Lindley Winslow, MIT

They’re so tiny, and virtually without mass, that trillions of them zip completely through us every day. In fact they pass through everything and only rarely have a reaction with other particles.

York University in Toronto Ontario has just joined a major international experiment to discover more about these mysterious particles.

Ray Jayawardhana (PhD) is the Dean of Science, and professor of Physics and Astronomy at York University.

What are neutrinos? Scientists are still trying to find out, but they may play a cosmic role in why planets exist, why we exist, why any matter exists.

The theory is that when the big bang occurred, the forces of matter and anti-matter did not balance out, meaning more matter than anti-matter, again allowing the cosmos, including us to exist.

It goes on to say that neutrinos may play a role in that “asymmetry” of matter and anti-matter.

This new experiment called DUNE- for Deep Underground Neutrino Experiment, will involve about 1,000 scientists from 31 countries.

New facilities will be created at two sites in the U.S. One will be at a facility known as Fermilab in Chicago which will be to create neutrinos and then shoot them in a beam through rock and earth towards a new receiving site in a deep mine shaft over 1,000 kilometres away in S.Dakota.

Part of this experiment is to understand how neutrinos change their characteristics.

As Professor Jayawardhana says, thanks in part to other Canadian scientists, it was discovered that these subatomic particles come in “three flavours”.

The Long-Baseline Neutrino Facility (LBNF) required for this experiment will comprise the world’s most intense neutrino beam and include a detector installed at Fermilab near Chicago. It will create and send the neutrino beam some 1,300 kilometres away to the the Sanford Underground Research Facility, a deep mine shaft in Lead, South Dakota where another detector is being created.

Working together, among other research, the sites will study the amount of change in the “flavours” of neutrinos as they travel from their initial point to the receiving station.

Groundbreaking for the experiment took place last July, and prototype detectors are under construction at CERN.

The Memorandum of Understanding which gives Canada’s York University a role in the huge international experiment was signed this week in Toronto.