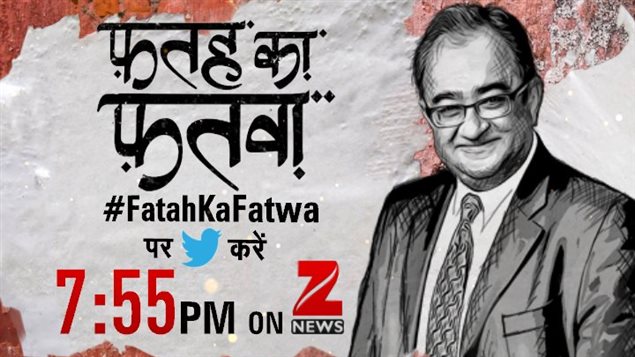 A Canadian Muslim campaigner against extremism speaks out

A Canadian Muslim is facing an Islamic fatwa against his life.

Pakistani-born Tarek Fatah, Canadian author, columnist, broadcaster and Muslim, is an long-time outspoken critic of extremist interpretations of the Koran.  Although Canadian, he also hosts a broadcast in India where he expresses his views on social situations and informed interpretations of the Koran. That has earned him a death sentence. He has also spoken out against the federal Liberal non-binding motion to condemn Islamophobia in Canada and “all forms of systemic racism and religious discrimination”. It also called on the Standing Committee on Canadian Heritage to carry out a study on how racism and religious discrimination can be reduced and collect data on hate crimes.

For his efforts to counter extremist views, Fatah is under threat of being killed in India with an arrest there last week, and another just today of people tasked with assassinating him to shut him up.

Here in Canada he appeared before a Parliamentary committee looking into condemning “Islamophobia”. The motion known as M-103 was introduced by Iqra Khalid, a Liberal MP and Muslim representing  a riding near Toronto Ontario.

Fatah says the word is used to stifle any criticism of Islam. When he appeared before the committee, he said he was verbally attacked by a committee member, and was not allowed to respond.

He also fears the “motion” is in the process of eventually becoming a law, in which critics of Islamic extremism, such as himself, could become criminalised by the law.

He is also critical of reaction by many politicians outside Quebec in regard to Quebec’s new law to ban face coverings, saying he is astounded that Canadian politicians seemed to be in essence defending the burka.

He is also amazed that women continue to be segregated in mosques in Canada, saying it’s like a return to the 12th century.

He says on his website he has listed several cases of men robbing stores and banks while completely disguised wearing a burka, and of a many who disguised himself with a burka in order to kill his wife.

He suggests that religious entities not be allowed to accept cash in order to prevent illegal end use, and that any charitable religious group that threatens another group should immediately lose charitable status.

One comment on “A Canadian Muslim campaigner against extremism speaks out”