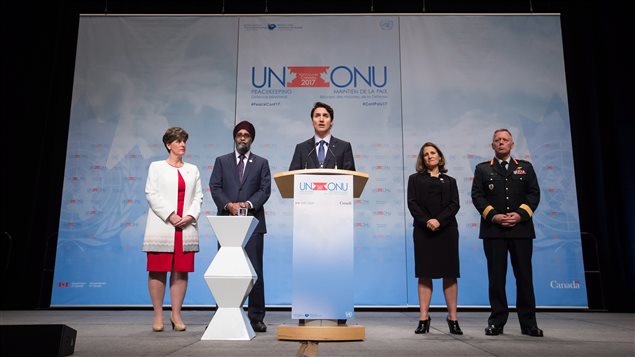 Prime Minister Justin Trudeau’s announcement detailing Ottawa’s contributions to the United Nations peacekeeping operations on Wednesday was a “missed opportunity for Canada and the international community,” says a Canadian expert and a former government adviser.

Prime Minister Justin Trudeau unveiled the planned contributions at a high-level summit in Vancouver, including millions of dollars to increase the role of women in peacekeeping.

The announcement fell well short of Trudeau’s August 2016 promise to deploy 600 troops and 150 police officers on UN peacekeeping missions, said Jocelyn Coulon, a fellow at the University of Montreal who has written extensively on peacekeeping operations over the last two decades.

“To invite Angelina Jolie and General Romeo Dallaire is kind of a window dressing to the fact that what you’re presenting is not what you have pledged to do a year before,” Coulon said.

“During the last 15 years Canada has been bombing in Afghanistan, in Libya and in Iraq. We have lost track that one of the pillars of the Canadian foreign policy was also being associated with the Blue Helmets that we helped to create.”

In August 2016, when four cabinet ministers unveiled the new peace operations policy, it was clear that Canada at that time was committed to real and strong re-engagement in peace operations, said Coulon who was working at the time as the senior policy adviser to then Foreign Affairs Minister Stéphane Dion.

Government advisers, including himself, worked hard to provide the Trudeau administration with options and these policy options were presented to the prime minister in December of 2016, Coulon said.

Top on that list of possible Canadian peacekeeping deployments was the UN mission in Mali, the deadliest UN mission but a critical one for the security of the entire region.

“He did not take a decision but he was satisfied,” Coulon said. “I don’t know what happened after that, because I left the office of the minister in February, but obviously he changed his mind.”

Coulon speculates that Trudeau’s change of heart was partly motivated by concern over possible casualties and partly high costs of running such an operation in the sub-Saharan West African nation at a time when the government was facing a ballooning deficit at home.

“What was announced yesterday, the Conservative Party could have announced the same,” Coulon said.

The Liberals have not shown meaningful change from the position of the previous Conservative government, he said.

“I think it will not be well received by our allies who are on the ground in Mali doing the hard work of peacekeeping,” Coulon said.

The largest component of Canada’s proposed military commitment will be a company-size quick reaction force of highly trained soldiers who would be deployed on a UN mission to provide security and respond to emergencies and attacks on civilians or aid workers.

The Royal Canadian Air Force will also be tasked to deploy CH-147 Chinook helicopters and CH-146 Griffon helicopters, which can be configured with machine guns to provide additional fire power if needed.

A Hercules C-130 transport plane and support staff would be stationed in the Ugandan town of Entebbe to assist in deploying UN resources.

In line with its feminist foreign and development policy, Canada is also offering a total of $21 million to help increase the number of women in peacekeeping operations, including $6 million to help with reforms at the UN and $15 million for a new trust fund.

The fund is intended to help partner together countries with good female representation in the ranks with those that want to have more women in uniform, but are facing challenges.

Canada will also make dozens of trainers available to the UN and other countries to help professionalize militaries from developing countries that are often involved in peacekeeping.

“We are making these pledges today because we believe in the United Nations and we believe in peacekeeping,” Trudeau said Wednesday.