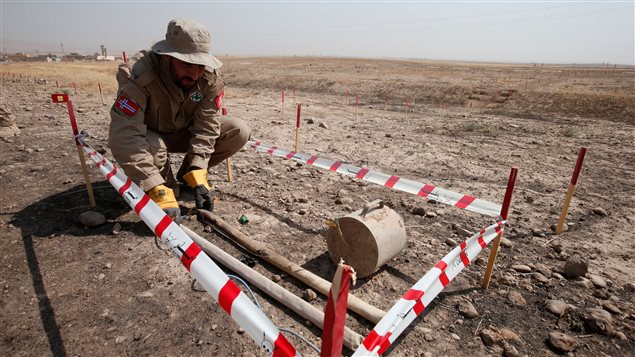 International and Canadian NGOs working on ridding the world of landmines are welcoming the Liberal government’s pledge to spend nearly $12 million to help with demining efforts in Syria, Ukraine, Colombia, Cambodia and Laos.

While details of the announcement are still being worked out, it was a good gesture for the Trudeau  government to make on the 20th anniversary of the Ottawa Convention to ban landmines, Hannon said.

“Now we want to see and work with them to put together a plan to make sure that we make the most strategic use of Canadian funding and that we can finish the job,” Hannon said.

The HALO Trust, a humanitarian mine-clearance organization, called for a sustained effort to achieve the goal of landmine-free world by 2025.

“HALO welcomes the announcement for increased funding from the Canadian government,” HALO spokesperson Louise Vaughan said in an email. “We hope that this increase will be sustained for following years until 2025.”

However, Canada’s announcement raised some questions about whether Ottawa’s funding directed to Syria and Ukraine implicitly favours one or the other warring side, creating two categories of civilians – those who will receive Western assistance because the authorities controlling the area are pro-Western and others who will not receive any Canadian assistance because they had the misfortune of being in areas controlled by forces opposed to the West.

For instance, the program in Syria targets mine clearance and training initiatives in the recently liberated areas previously held by the so-called Islamic State in Raqqa and in southern Syria, where “explosive devices have been placed in homes, schools and public areas of Syria by Daesh,” officials said in a statement, referring to IS by its Arabic acronym.

However, Ottawa’s funding for Syria will be directed only to areas under the control of the Western-friendly opposition.

In contrast to the situation in Syria, the Canadian funding in Ukraine will focus on areas under the control of the pro-Western government but not the breakaway territories controlled by the Moscow-backed rebels.

Hannon said while he can understand why some people might think that there is a bias there, it’s important to understand that mine clearance operations by civilian NGOs depend on several factors that determine whether or not they can operate in any given area.

“In clearance work you have to bring in a lot of equipment, you have to have access to an ambulance or a helicopter and healthcare in case there is an accident that occurs,” Hannon said.

Also most organizations such as HALO Trust hire their staff locally so they must have facilities and an area where they can provide the necessary training, he said.

“They need to have a degree of safety and security to be able to do this work, they need to have access to the contaminated land,” Hannon said. “That means you have to get approval from either the government, if it’s a government controlled land, or the force that may be controlling the land.”

The NGOs also need to have some form of support or acceptance by the government that has the jurisdiction of the area even if that government doesn’t fully control it, Hannon said.

“There are organizations that work in Syria but those are the areas they can get access or where they can feel that they have sufficient security and safety to work there,” Hannon said. “As humanitarian organizations I think they would want to work anywhere as long as they can meet those conditions.”

There are also countries such as Myanmar that have never allowed civilian NGOs to establish demining operations, he said.

At the same, in countries such as Afghanistan demining NGOs continue their work despite the ongoing conflict, Hannon said.