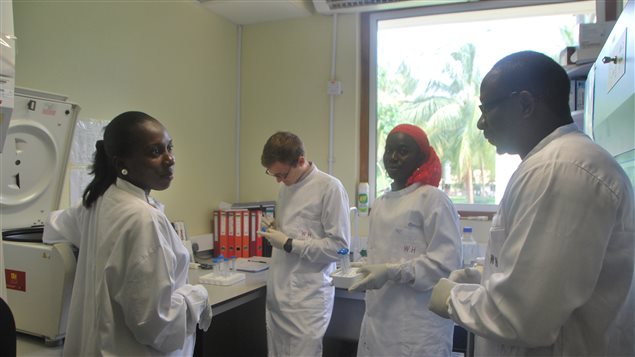 Trials in The Gambia and Malawi

Tuberculosis, or TB as it’s more simply known, is a deadly disease especially for children.

In 2015, there were about 1 million incident cases of tuberculosis in children younger than 15 years of age, and as many as 210,000 children died from the disease.

Detected early, TB can be readily defeated, but early detection in children is difficult.

Scientists at the Research Institute of the McGill University Health Centre in Montreal, Canada, are working on a new, simpler and more accurate method to detect the disease in children

Dr. Toyin Togun (MD, PhD) is lead on the project. He has been a Steinberg Global Health Fellow since 2016 in the Department of Epidemiology and Biostatistics at McGill University.

Caught early, tuberculosis can be overcome with relatively inexpensive drugs and treatment, but early detection is the issue, especially in children. This is where an international team of researchers  led by scientists based in Montreal are focusing their efforts.

Dr Togun, lead researcher, says TB is too often a disease of poverty. There are high incident rates in developing countries, which is where McGill scientists and a team of international researchers are holding validation trials of their new detection method.

Typically, TB is detected through lab analysis of sputum, and chest X-rays, but Dr Togun notes that children aften cannot produce adequate sputum samples from deep in the throat and X-rays of children are not reliable due to other factors such as other unrelated respiratory issues.

When not detected early, the TB can spread in the body, and lead to death.

What the researchers have discovered is a blood-based biomarker of TB that can tested from a sample of blood and which does not require highly sophisticated lab equipment or processes. The team is now working on a process to develop the test using a simple finger prick blood sample.

Potential to save lives

This would be of enormous advantage in developing countries where lab facilities and experience are less available, and where children can be tested and diagnosed. This has the potential to save literally thousands of lives, not just in West Africa, but indeed around the world, and not only in developing countries but anywhere children are suspected of having the disease.

The biomarker and detection process has shown a high degree of reliability and the project is now undergoing validation in The Gambia and other areas involving children facing a wide spectrum of health situations.

Supervising the work is Dr. Madhukar Pai, associate director at the McGill International TB Centre based at the RI-MUHC and McGill University. He and his team was awarded a $100,000 grant from Grand Challenges Canada for their pioneering work to improve the diagnosis of TB in children under the age of 15.

Because it is more accurate, the new test will also help to detect which suspected cases have TB or not. This in turn will eliminate unnecessary treatment for those not having the disease, while avoiding actual cases being misdiagnosed and sent away without getting treatment.