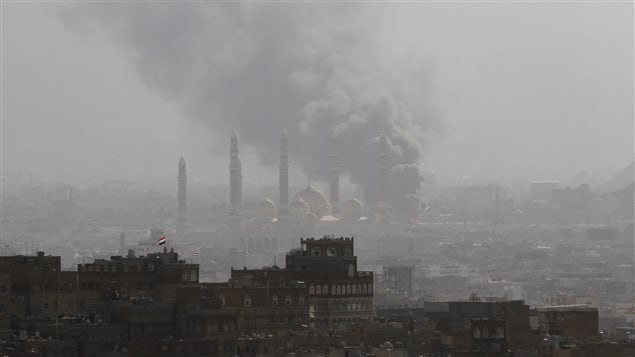 Canada called for a humanitarian pause in Yemen on Wednesday, amid reports that the Saudi-led coalition intensified air strikes in the country as the Houthi rebels tightened their grip on the capital after killing their former ally, ex-president Ali Abdullah Saleh, who switched sides in the bloody conflict.

Heavy street fighting between Houthi militia and Saleh supporters, as well as renewed airstrikes by Saudi Arabia and its allies have paralysed the capital, trapping civilians in their homes for several days without safe access to medical assistance, said the international medical organization Médecins Sans Frontières/Doctors Without Borders (MSF).

MSF also reported that medical teams using ambulances to try and retrieve the injured have come under sniper fire. Hundreds of people are reported to have been killed.

The top United Nations relief official in the country, Jamie McGoldrick, appealed for a “humanitarian pause” on Monday to allow desperate civilians reach assistance and safety as well as for aid workers to reach them.

“Canada supports the call made by the United Nations for a humanitarian pause to allow civilians to leave their homes to seek assistance and protection,” Freeland said in a statement.

“Unless all parties to the conflict allow the urgent resumption of humanitarian and commercial imports, many more civilians, including a great many children, will die.”

Restoring peace to the country and dignity to its people is urgent, she said.

“Canada calls on both the Houthis rebels and their supporters, and the Hadi Government and its Coalition partners, to return to the negotiating table,” Freeland said

“Further, Canada calls on all parties to the conflict in Yemen to abide by their obligations under international humanitarian law to avoid civilian casualties, including those of humanitarian and medical personnel, and to allow and facilitate the delivery of life-saving assistance to civilians in need.”

Yemen’s war, pitting the Iran-backed Houthis who control Sanaa against a Saudi-led military alliance backing a government based in the south, has unleashed what the United Nations calls the world’s worst humanitarian crisis.

Over 17 million Yemenis, nearly two-thirds of the population, is food insecure while 8.5 million people are on the brink of starvation, according to UN Emergency Relief Coordinator Mark Lowcock.

In all, close to 21 million people across Yemen are in need of humanitarian or protection support, Lowlock told the UN Security Council on Tuesday.

The violence has also devastated basic services in the country, destroying Yemen’s already poor water and sanitation system, which in turn has sparked a deadly cholera outbreak, the largest in the world.

End of an era

The latest round of violence began after Houthi forces attacked Saleh’s forces amid reports that he had switched sides.

Saleh, backed by large parts of the Yemeni military, had helped the Houthis win control of much of the north, including  Sanaa, and his decision to switch allegiance and abandon the Houthis in the past week was the most dramatic change in three years of stalemated war.

But the Houthis swiftly crushed the pro-Saleh uprising in the capital and killed Saleh, who had ruled Yemen from 1978 to 2012, on Dec. 4 as he tried to flee the capital.