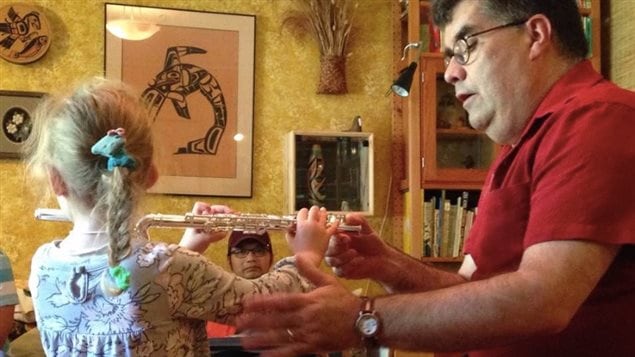 David Gerry’s life was ebbing but he received teachers and students from Canada, the U.S. and other countries who dropped everything to come see him in the few weeks before he died on December 4, 2017 in Hamilton, Ontario.

Such was the impact he had as a fine performer, a teacher of people of all ages, a teacher-trainer notably with in the Suzuki Association of the Americas which gave him the most recent of his many awards. Gerry also researched and taught at McMaster University.

It was in October that he performed with Symphony on the Bay in Burlington, Ontario, and afterwards felt unwell. Within days he was hospitalized and later diagnosed with an aggressive cancer that, heartrendingly, broke first one arm and then the other, before taking his life.

Among his many talents, Gerry was a keen observer who could make even very young children feel like real musicians. “He would be observing everything about a child; about their demeanor, about their eye contact, about how comfortable they felt,” says Kelly Williamson, a flute teacher who regularly performed and collaborated with him on teaching endeavours.

“And he had so many ways of defusing that tension…Sometimes he would ask a child to shake his hand after they had done something successfully. He’d just keep shaking and shaking. And we’d be wondering what he was doing. And in fact, the kid’s arm had been so tense…and he’d just shake it out. It would become a joke. He wouldn’t say anything more. He’d just move on.”

Gerry always wore funny socks or had pictures of his pets, stuffed animals or other props that he used to relax children he was working with. And so often, he used humour.

“His use of humour was one of the things that was really particular and helped him even to connect with those cranky teenagers,” says Williamson. After looking over some notes, she says she “found an instance where he said to a student ‘shall we do this then?’ And the student said ‘no.’ And he just said ‘thanks for agreeing with me’ and he just kept going. And, of course, kids of all ages would just laugh and they would just go along…with his stories and go along with his agenda. It was just a wonderful thing to observe.”

Gerry showed skill and sensitivity with teachers, and he shared what he knew with them. “He shared so generously. I think that was one of the biggest things that we all appreciated about David,” says Williamson. “When he was a visiting teacher working with our own students…it could be really humbling because he would pick something to work on and it would make this massive change in how the child played.

“And you, as a teacher, would be sitting there thinking ‘why didn’t I do that?’ Meanwhile, he’d be busy reinforcing the teacher’s position with the student, complimenting them on what the teacher had done with them. He really was a team player in that way. He inspired all of the teachers to feel more confident about what they were doing, to feel more capable…And he shared his tools and his insights to help us.”

In the short time Gerry had, he gave away music and his many instruments, and he also worked hard to connect the many people he knew so they could support each other and carry on with the work he loved.

I asked Williamson what he leaves behind and, echoing Gerry’s brand of humour, she described a novel way he taught proper hand position, a critical factor in playing flute well. “David would be teaching in Australia or in the U.S. and he’d say, ‘Today is a very special day in Canada. Do you all know about this?’ Of course, they’d look at him bemused. And he’d say ‘It’s International Good Hand Position Day. Don’t you guys celebrate this here?’” He would then ask students raise their right hands and pretend they were holding a hamburger. Gerry called this a “flute wave,” a secret signal known to all flutists and he encouraged them to greet each other using it.These were among the fun ways he invented to develop good technique.

“There are a great many of his expressions that we really loved…of his tricks, and his phrasings, and his jokes that we’re going to continue to enjoy, I think, maybe forever.”

David Gerry requested that after his death there be a memorial concert to at Hamilton’s Central Presbyterian Church. That is in the planning stages.

Lynn Desjardins’ daughter attended Suzuki flute master classes with David Gerry for over a decade beginning at the age of five. Both she and her daughter studied flute with Kelly Williamson for several years.