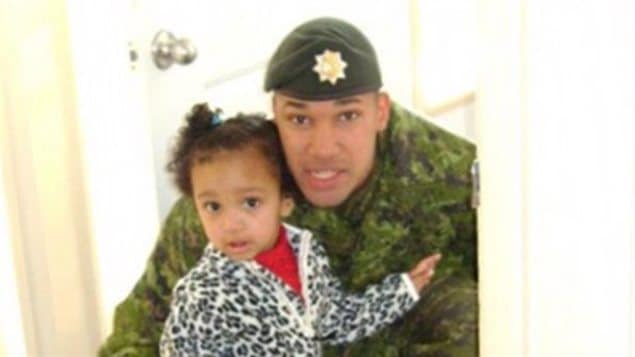 Lionel Desmond and his daughter, Aaliyah, are shown in an old photo from Facebook. Aaliyah had recently turned 10 when she was killed. The Nova Scotia government has announced an inquiry into the deaths of a former soldier and his family nearly a year after the tragic murder-suicides sent shock waves across the country.
Photo Credit: Canadian Press/HO-Facebook

O’Regan suggested in October his department didn’t have the jurisdiction to conduct an inquiry because it could not gain access to provincial medical records.

Details of the inquiry will be announced in the new year, but veterans’ advocates are hoping O’Regan’s decision will lead–at the very least–to more cooperation between Ottawa and the provinces as they seek to help prevent similar tragedies in the future.

And advocates have long called for a public inquiry into the murder-suicide case involving Lionel Desmond, hoping it will bring change for injured soldiers transitioning out of the military.

Desmond, 33, killed his mother, Brenda Desmond, 52, his wife, Shanna Desmond, 31 and their 10-year-old daughter, Aaliyah, before killing himself in their home in Guysborough County, N.S. on Jan 3.

“The purpose of this, of course, is to look for some tangible connection between the deaths and the appearance of a failure of policy or practice which, if corrected, is likely to prevent future deaths of this type, Bowes said.

“It’s not like Mr. Desmond was unknown and this happened out of the blue–there was a trajectory. There was touch points in our system and I think it would be very valuable to look at how those things occurred and how we might, it retrospect, have done it differently.”

A native of Antigonish, N.S., Desmond joined the armed forces in September 2004 and served until July 2015 when he received a medical discharge, retiring as a corporal.

He served two tours of duty in Afghanistan and was diagnosed with post-traumatic stress disorder (PTSD) and post-concussion disorder when he returned to Canada in 2007.

Family members say he was a changed man after his discharge, lacking his former sense of humour, constantly withdrawn and in a defensive posture much of the time, as if he was still in combat mode.

Since the tragedy, Desmond’s twin sisters, Chantel and Cassandra, have campaigned for an inquiry, maintaining that their brother did not get the help he needed.

“It’s about time,” Chantel Desmond said Thursday, after the inquiry was announced.

“We’re fighters and we’re not going to give up,” she said. “I think they really felt it would get nowhere and get swept under the rug but this is just the beginning.”