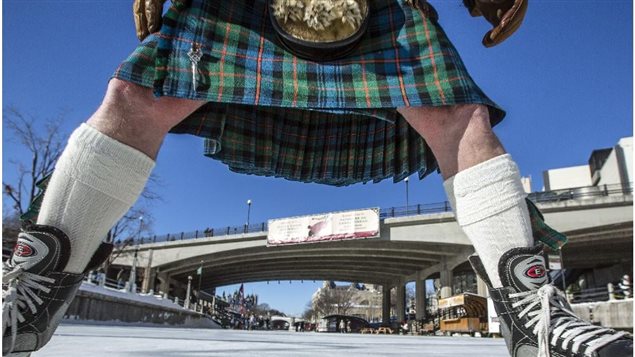 The Great Canadian Kiltskate events are about to begin for 2018. Originating in Ottawa on the Rideau Canal in 2015 (shown), events are now held in several cities across Canada for those willing to brave chilly knees for a few hours of fun and entertainment.
Photo Credit: kiltskate.com

There’s no doubt that Scots are a bonnie brae lot.  Add the Canadian experience and you increase that hardiness dramatically.

That’s shown by the thousands who turn out across Canada for the annual “Great Canadian Kiltskate” events.

A great many Canadians of Scottish decent, and many others who simply like the challenge, will don their kilts and ice skates and head out for some Canadian winter fun.

This is the fourth year for the event which was initially organized by Ottawa author Don Cummer as a way to celebrate the 200th anniversary of the birth of the “father of Canadian Confederation” Scottish-born Sir John A Macdonald.

In a press release this year Cummer says the events are open to everyone, “It’s a chance to nurture your inner Scot. You don’t have to be Scottish,” and adding, “Just come to the party with a spirit of Scottish fun and fortitude, and wear Canada’s favourite colour – tartan!”

This year, the Scottish government is contributing some funding to the events in cities across Canada which Cummer says has enabled the various events to grow bigger and offer more to participants, including hiring entertainment, and offering hot chocolate drinks and Sir John A birthday cake.

“The Great Canadian Kilt Skate is growing into a truly national celebration of what it means to be Scottish in Canada,” says Chris Maskell, the Scottish Government’s representative in Canada. “The Scottish Government is delighted to be supporting again this year. We’re especially interested in reaching out to a younger generation in our Year of Young People, and we love the exuberance and sense of fun of Canada’s kilt skates.”

The funding from the Scottish Government- the second year it has been offered,  is administered through the Scottish Society of Ottawa, which was instrumental in creating the first kilt skate in 2015, and turning it into a national phenomenon.

While almost all of Canada has been in the grip of a deep Arctic cold with temperatures and wind chill often making it feel like -30C or colder, the weather is expected to get back to more normal temperatures across southern regions of the country by the weekend.