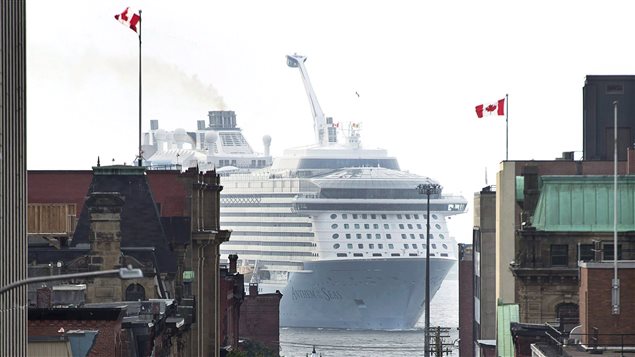 I am willing to bet most Canadians did not know Saint John in the eastern province of New Brunswick is an increasingly popular cruise ship destination. It is a small town with a population of 67,575, according to 2016 statistics.

Lots of trees and moose

The province is virtually covered by forest and has a big moose population.  In fact, a popular comedy show on CBC has a skit about that.

So, Saint John is not the first place a Canadian might think of visiting and often it is seen as the big province you have to drive through to get to Nova Scotia or Prince Edward Island. That said, I stopped over in Saint John on such a trip and found the town to be utterly charming.

It has plenty of old buildings, some very good restaurants and a pleasing layout. It also is situated on the Bay of Fundy which is has the highest tides on earth and some remarkable and rare whales.

I have also learned that Saint John is home to Canada’s third largest port by tonnage.

And the port is predicting a 19 per cent increase in the number of passengers who will arrive on cruise ships in 2018. It expects 75 ships will bring about 176,000 passengers. A recent study found that cruise activity represents an annual boost of almost $50 million to the province’s economy.

Direct spending from cruise activity amounts to about $21.5 million and accounts for 298 direct jobs and $12.5 million in personal income. And that is just for activity between May and November.