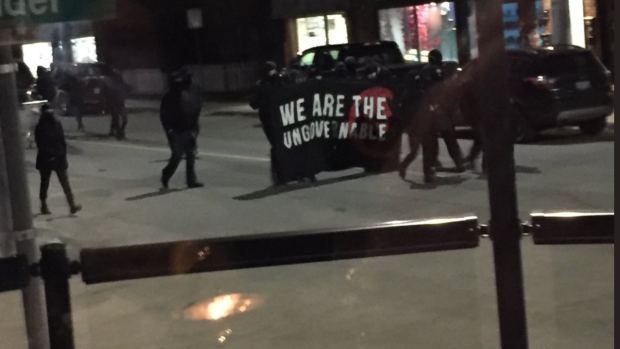 At around 10 p.m. Saturday night a group of about 30 individuals dressed in black clothing with their faces covered walked through the streets carrying a banner that said, 'We Are The Ungovernables,' say police. (@OliverioCarmela/Twitter)

When marauding vandals dressed in black and wearing face masks took to the streets of downtown Hamilton, Ontario on Saturday night setting off firecrackers, hurling rocks through storefront windowns and overturning cars and recycling bins, Canadians were shocked and horrified.

Violent protests are not something Canadians are accustomed , excepting Stanley Cup victory celebrations that sometimes can get out of hand, a

Carrying a banner that said “We Are The Ungovernables,” the vandals shed their costumes and fled when police arrived, leaving an estimated $100-thousand in damage in their collective wake. 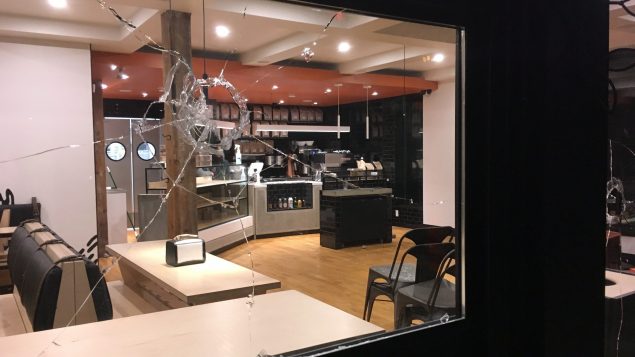 The vandals caused an estimated $100-thousand in damage, overturning recycling bins, hurling rocks at storefronts and overturning cars along a one-kilometre stretch of Locke Street in the Hamilton’s Kirkendall neighbourhood. A broken window is seen at Donut Monster on Saturday.
(THE CANADIAN PRESS/HO-Reuben Vanderkwaak)

At a press conference on Tuesday, Hamilton police linked the mob to an anarchist book fair held at a Hamilton high school over the weekend but did not reveal the nature of their evidence.

They are now asking anyone living within a three-block radius of the affected area–a one kilometre stretch of Locke Street in the city’s Kirkendall neighbourhood–to check security camera video to see if any footage exists of unmasked marauders.

Police also said they were aware of an anonymous posting on an anarchist blog, allegedly written by someone claiming to be a participant in the incident.

“To all the undoubtedly sincere and principled anti-capitalists on the internet who wonder why the Starbucks didn’t get smashed but all the poor, sweet small businesses did, it’s only because it was just a bit too far north. My one regret from the evening,” the blogger wrote.