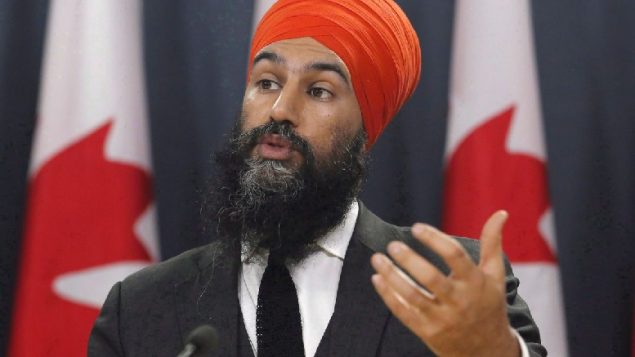 The leader of one of Canada’s three major federal political parties is finding himself in hot water today.

Jagmeet Singh was elected as the leader of the left-leaning federal New Democratic Party (NDP) in October of last year, but certain questions about a relationship with Sikh separatist groups and extremism have shadowed him.

The latest uproar is due to a video that surfaced showing him speaking at a Sikh “khalistan” independence rally in the U.S. in 2015.

Sikh’s waving swords and shouting “Kalistan” ( a Sikh homeland) were seen at the rally attended by Jagmeet Singh in San Francisco in 2015. PHOTO-Sikh Roots/YouTube

Shortly after this week’s recent revelation, yet another video has surfaced showing him speaking at a rally in London in February 2016.

That event was hosted by the National Sikh Youth Federation (NSYF) which advocates for an independent Khalistan. At that rally another speaker said one of the principles of Sikhdom is that “it endorses violence as a legitimate form of resistance and survival”. 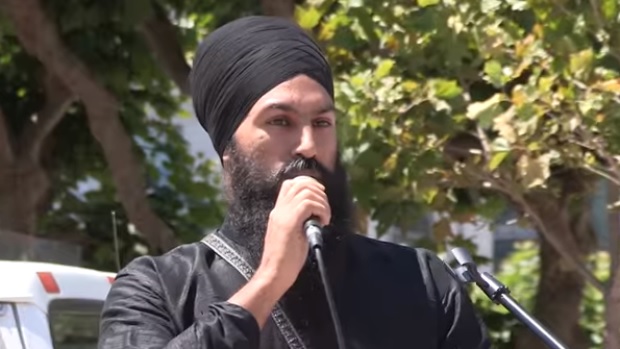 Jagmeet Singh speaking at the 2015 Sikh pro-independence rally in San Francisco which featured a poster of a prominent Sikh referred to as a terrorist by India. PHOTO’ Sikh Roots-You tube

The latest concern adds to the NDP leader’s association with a number of other situations related to Sikh extremism.

For example, Singh has also been criticised for not directly denouncing the glorification of terrorist Talwinder Singh Parmar whose image appears on Sikh temples and posters as a “martyr”.  Parmar, who was allegedly killed in an exchange of fire with Indian police in 1992 created the militant movement called Babar Khalsa International while living in Vancouver.

A Canadian Commission of Inquiry into the tragic 1985 Air India bombings named Parmar as the leader of the conspiracy, although he was never convicted.

Last year, Jagmeet Singh responded to CBC TV questions about Sikh extremism and the Air India bombing saying at the time “I don’t know who was responsible, but I think we need to find out who’s truly responsible”.

Singh also spent time in his early political career trying to get the Ontario provincial government to label the 1984 anti-Sikh riots in India as an act of genocide.  The riots and multitude of deaths came after Sikh bodyguards assassinated Indian Prime Minister Indira Ghandi.

In March 2012, he also spoke out in the Ontario legislature against the death penalty handed down by India against Balwant Singh Rajoana, a member of a Sikh terrorist group that conspired to kill a Punjabi politician, although he placed it in the context of calling for a worldwide moratorium on death penalties. 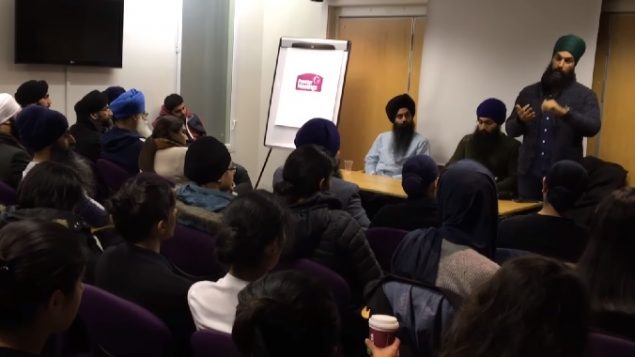 This latest revelation of a speaking presence at the Sikh separatist rally in San Francisco that also included included a large poster of extremist leader Jarnail Singh Bhindranwale, viewed by some as an unrepentant terrorist.

Following this latest revelation, the NDP leader issued a statement which said in part, “I condemn all acts of terrorism in every part of the world, regardless of who the perpetrators are or who the victims are”, before going on to mention again the 1984 Sikh “genocide” in India.

These latest issues are unlikely to help improve Canada-India relations still slightly strained after Canadian Prime Minister Justin Trudeau’s visit where concerns about Canada being soft on Sikh separatism were brought up.