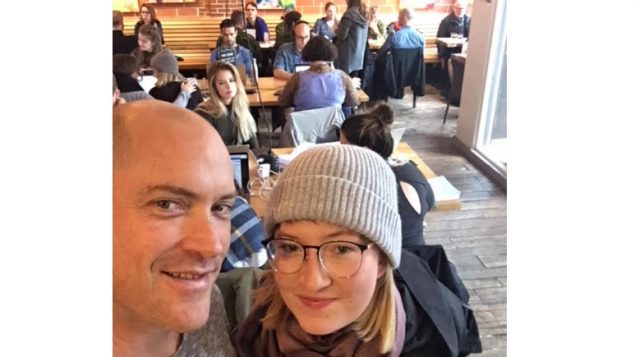 Owner and manager of the Lion and Bright, Sean Gallagher and friend shown with "campers" in the background on the restaurant tables. PHOTO: S Gallagher

Many businesses now offer free wi-fi as a customer service, but, how many times have you seen people in a coffee shop, a restaurant, or elsewhere who are occupying a space alone and silently staring into their laptop screens or smart phones. It seems like they may have been there for quite some time and the single coffee they ordered is either long gone, or cold.

They don’t buy much and they take up that space creating an invisible wall around them, often for long periods..

Sean Gallagher owns a café/bistro/restaurant, and he says they were hurting his business, especially the image.  He didn’t want to refuse them, but had to take drastic measures to change their ways by making the business less laptop friendly

In the business they are called “campers” or perhaps the less delicate “wi-fi hogs”.  These are the people who sit in coffee shops taking advantage of the free wi-fi.

Sean Gallagher is the owner manager of the Lion and Bright in Halifax, Nova Scotia. 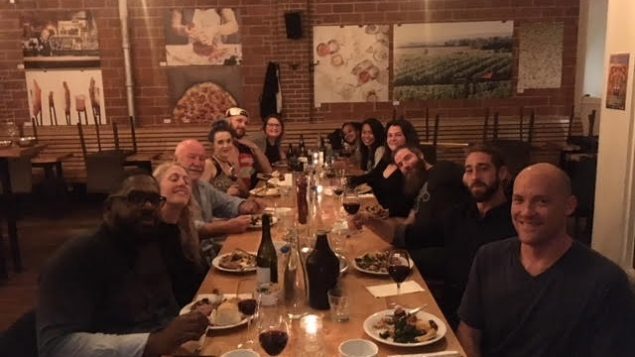 Sean and friends showing original long “harvest” tables and the original concept of a community space where friends and strangers could meet and engage in conversation over drinks and food. Gallagher says he wanted to create a space away from screens, for downtime and especially in the evenings, a place to unwind. PHOTO: supplied

Now in its fourth year he wants his café/bistro/restaurant operation to be a community space for conversations, and live events and exhibition spaces but the loner campers were “spoiling the vibe” he says.

He says instead of inspiring conversations in a community atmosphere, they were turning it into a library, discouraging couples and groups from coming in for conversations and idea exchanges. 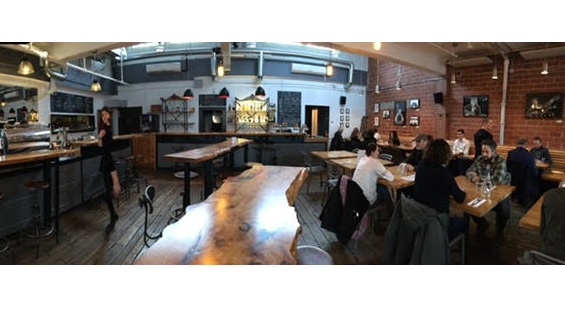 The revised arrangement screen users are not refused but instead directed to the stand up expresso bar, or the high bar stools and tables, with no screens after 5. PHOTO: S Gallagher

He tried persuasion saying no screens after 5 p.m., but there was resistance from campers who engaged in tedious esoteric arguments with his staff and often posted nasty comments online. So he took more drastic measures, making it somewhat less user-friendly for “campers’.

He took a week in January to drastically change the setup, with more formal separation of spaces. The long harvest tables were cut up into smaller four place tables.. He also initiated assigned seating so that if a potential camper comes in during the day, the person is directed  by the “host” to a specific area at the expresso cafe bar, either to stand at the high tables, or sit on high hard stools. They are also clearly told upon entering that there will be no screens after 5 p.m. 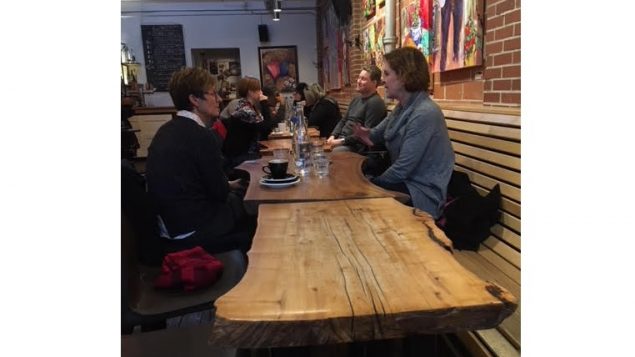 Patrons seated in the restaurant section with the long park bench seat along the wall. Reaction to the move to control “campers” has been generally praised by patrons. PHOTO: S Gallagher

It may not now be exactly his initial vision, given the requirements of the market and the interior layout change, but it’s getting back to what his initial vision of encouraging a meeting place for people in the community. He says most reaction to the change has been quite positive from guests and other business people. He also says he ignores the negative comments online made by anonymous campers.