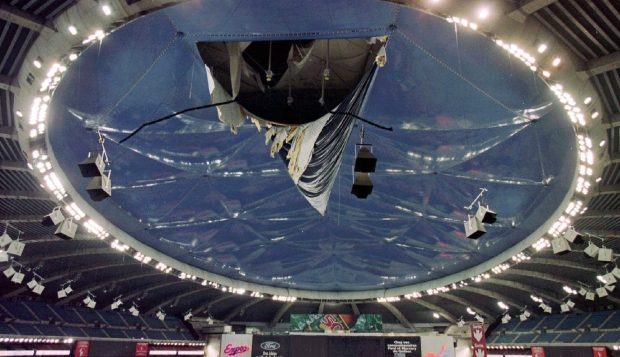 A hole, believed to have been caused by accumulation of snow, is seen in the newly installed Olympic Stadium roof after it tore in 1999. Five years later, the Montreal Expos, who played at the stadium, left town for Washington, D.C. There's been an emotional gap ever since, but many fans who mourned the loss will be back at the stadium this week to try to convince Major League Baseball that Montreal can support a team. (Paul Chiasson/Canadian Press)

This is the time of year when baseball fans in Montreal get their hopes up and let go–at least for a little while–the long-lingering pain they have felt since the Expos left for Washington, D.C. following the 2004 season.

For the die-hard fans, it still hurts–a lot. 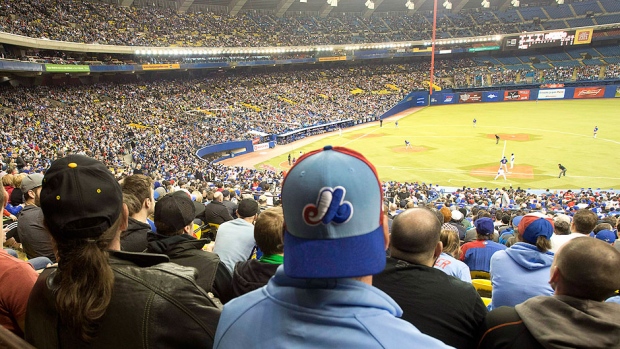 Thousands of baseball fans have turned turn out for exhibition games at Olympic Stadium involving the Toronto Blue Jays for the past four years. But advance sales are down this year. (Ryan Remiorz/Canadian Press/File)

There was a giant gala Sunday night reuniting about 10 former Expo players and the fans that adored them for so many years–part of the leadup to a pair of exhibition games between the Toronto Blue Jays and the St. Louis Cardinals Monday and Tuesday at Olympic Stadium.

This is the fifth year the Jays have come to town to finish off their Grapefruit League schedule.

And every year Montreal baseball fans, carrying a hurt to match that giant hole that once ripped open the Olympic Stadium roof, have packed the joint, hoping to impress the poobahs who rule the cartel know as Major League Baseball that a team belongs in Montreal.

But hopes for a return of baseball may be fading, at least a bit.

The advance sale for each of this week’s games is about 25,000, about half the size of the crowds that have turned out in the past. 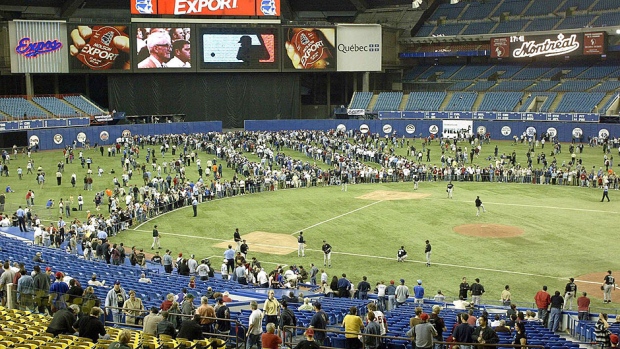 Fans fill the outfield at Olympic Stadium prior to the Expos’ final game on Sept. 29, 2004, against Florida. Many Montreal baseball fans continue to hope that it’s just a matter of time before a major league team returns to the city. (Paul Chiasson/Canadian Press/File)

But those games were played on weekends.

This year they are being played on a weeknight, a school night.

How much the size of the crowd will matter in the final decision on whether the Expos return is yet to be determined.

Denis Coderre, who adores the game, lost to Valerie Plante, who appears to be anything but a baseball fan and, in fact, has passed on going to either of this week’s games.

For an assessment of where the return of the Expos stands and where it goes from here, I spoke with Dave Kaufman, a long-time lover of baseball and a talk show host in Montreal.