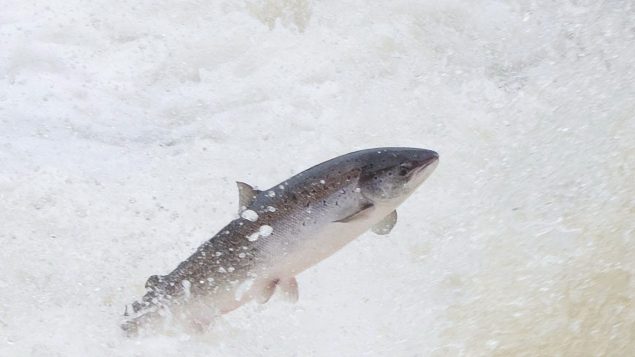 A wild salmon returning from the ocean climbs up a waterfall on the Humber River in Newfoundland. A new report says fewer salmon are returning to North American rivers. (Tom Moffatt/Atlantic Salmon Federation/hand-out/The Canadian Press)

The number of wild Atlantic salmon returning to North American rivers dropped 15 per cent in 2017 compared to the year before, reports the Atlantic Salmon Federation. Its latest report says only half of the 84 rivers it monitored met minimum requirements to sustain this species of fish.

The biggest decline was in Canada’s easternmost province of Newfoundland and Labrador. 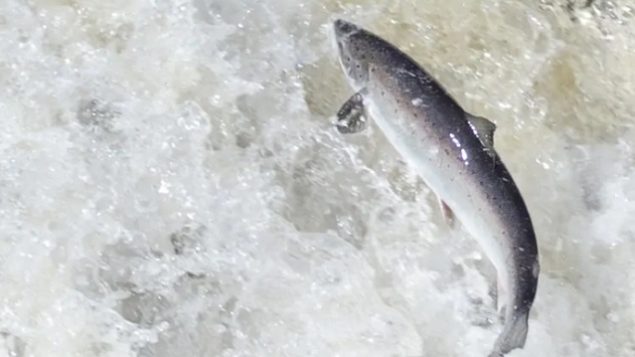 A 12-year agreement by Greenland fishermen to not fish salmon for commercial purposes is expected to increase the number returning to North American rivers to spawn. (Tom Moffatt/Atlantic Salmon Federation/hand-out/CBC)

Comparing year-to-year declines doesn’t give the whole pictures, said federation Neville Crabbe to Canadian Press. “When you pull back the lens and look at what’s happened since the 1970s, we’ve had multidecadal declines in wild Atlantic salmon populations throughout North America.”

The federation is going to raise the issue at a summit of the North Atlantic Salmon Conservation Organization taking place this week in Portland, Maine in the United States. It will ask national government delegations to take steps in their home waters to improve the situation. Among them, the federation will ask delegations to minimize or eliminate threats from open-net salmon farms, to prevent salmon fishing among threatened and endangered populations, and to ensure that all river fisheries are conducted sustainably.

There are rivers that have relatively healthy returns thanks to conservation measures already in place. There is hope numbers will increase as a grateful federation lauded Greenland fishermen for recently agreeing to end their commercial fishing for 12 years, which should affect the return of salmon to North America.

One comment on “Atlantic salmon numbers drop for second year”