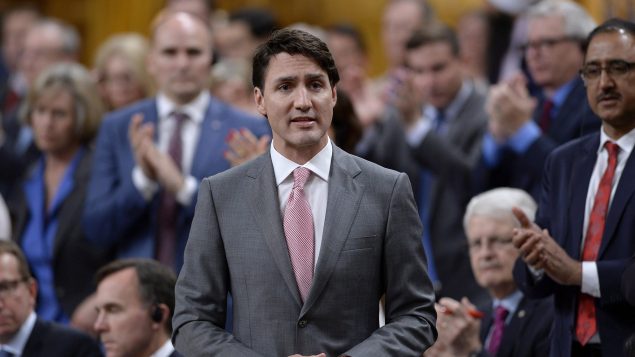 House of Commons votes against restoring ties with Iran

The Trudeau government’s surprising decision Tuesday to back a Conservative motion in the House of Commons denouncing Iran puts an end to the Liberals’ quest of normalizing relations with Tehran in the foreseeable future, experts say.

In a reversal of its long-stated goal of improving strained relations with Iran, the Trudeau government voted a motion demanding that Ottawa “immediately cease any and all negotiations or discussions” on restoring diplomatic relations with Tehran.

The strongly worded motion introduced by Alberta Conservative MP Garnett Genuis also condemned Iran “for its ongoing sponsorship of terrorism around the world” and the country’s Supreme Leader Ayatollah Ali Khamenei for “calling for genocide against the Jewish people.”

It also designated the elite Islamic Revolutionary Guard Corps (IRGC) as a “listed terrorist entity” under the Canadian Criminal Code.

The motion also demanded the immediate release of all Canadians and Canadian permanent residents held in Iranian jails, including Maryam Mombeini, the widow of professor Kavous Seyed-Emami, and Saeed Malekpour, who has been imprisoned since 2008.

“Today’s vote condemning the regime and declaration of the Islamic Revolutionary Guard Corps as a terrorist entity was historic,” Conservative MP and the party’s foreign affairs critic Erin O’Toole said Tuesday. “I also want to thank the Liberal government for re-visiting their position on Iran.” 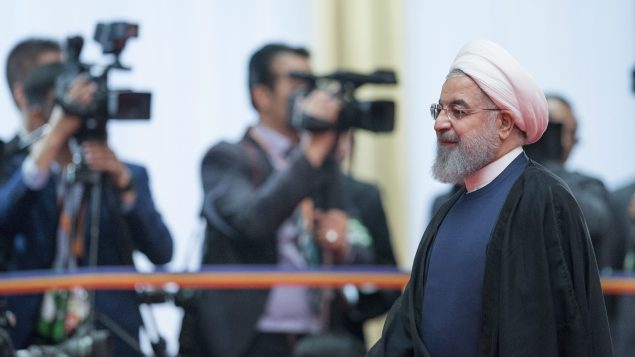 Thomas Juneau, assistant professor at the Graduate School of Public and International Affairs at the University of Ottawa, said while the motion is non-binding, it is politically and symbolically very significant.

“It’s not really plausible for the government two weeks from now to simply reverse that position,” Juneau said. “It doesn’t mean that this is indefinite, it can change, but this is a clear change in position.”

The Liberal support for the Conservative motion shows that the policy of reengaging with Tehran had clearly stalled, he said.

“Not only there is no embassy (in Tehran) today, but there have been no concrete signs of progress,” Juneau said.

“So for the Liberals, because of the many obstacles of trying to re-establish relations, it’s fairly easy to say, ‘Well, we don’t support it anymore,’ which politically is probably more popular than continuing to try to engage with what is clearly a very brutal dictatorship.”

Prime Minister Justin Trudeau’s decision to support the Conservative motion on Tuesday was directly motivated by the Membeini case, said a government official speaking on background.

During the federal election in 2015, the Liberals had campaigned on the promise of restoring Canada’s diplomatic ties with Iran that had been severed by the previous Conservative government in 2012.

A Global Affairs Canada official speaking on background, told Radio Canada International that Ottawa sent two diplomatic missions to Iran in May and in October of 2017 to explore the issue of restoring diplomatic ties.

One of the biggest stumbling blocks on the road to restoring diplomatic relations between Ottawa and Tehran was that Iran is listed as a terror supporting country under Canada’s Justice for Victims of Terrorism Act, Juneau said.

“Iran had said fairly clearly that it would not accept reopening embassies as long as it was listed as a state sponsor of terrorism,” Juneau said. The Liberal government, on the other hand, had adamantly refused to take Iran off its list, he said.

Fighting for release of Canadians held in Iranian jails 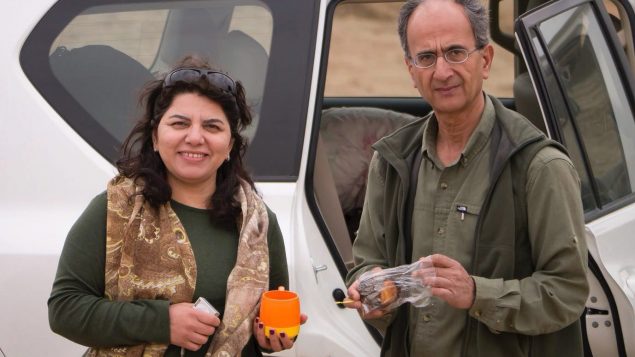 This undated photo provided by the family of the late Iranian-Canadian professor Kavous Seyed-Emami, shows him, right, and his wife, Maryam Mombeini, in an unidentified place in Iran. (Family of Kavous Seyed-Emami via AP)

The other major stumbling block was the fate of Canadians held in Iranian jails.

Adam Austen, press secretary of Foreign Affairs Minister Chrystia Freeland, said Canadian officials were “deeply concerned and shocked by his death” and Canada continues to call for answers regarding his death and detention.

Then his widow, Mombeini, also a Canadian citizen, was barred from leaving Iran to return to Canada with the couple’s two adult sons.

“As Minister Freeland has said, including directly to Iran, until Maryam Mombeini is allowed to return home, her freedom will be the only topic of discussion we have with the Iranian government,” Austen said. 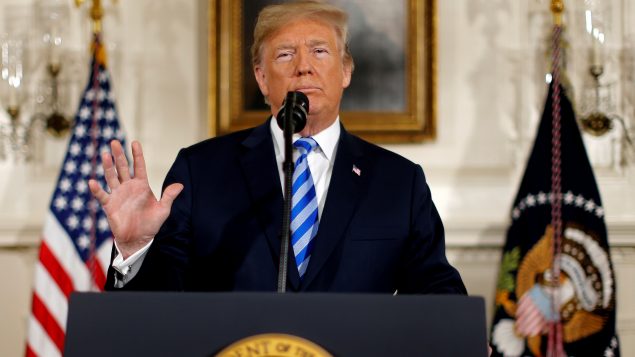 U.S. President Donald Trump announces his intention to withdraw from the JCPOA Iran nuclear agreement during a statement in the Diplomatic Room at the White House in Washington, U.S. May 8, 2018. (Jonathan Ernst /REUTERS)

Despite the reversal of the policy of seeking the restoration of diplomatic ties with Iran, Canada continues to support the Joint Comprehensive Plan of Action (JCPOA), which seeks to curb Iran’s contentious nuclear program, Austen said.

“We have said all along that while the JCPOA is not a perfect deal, it marks a hugely important step forward for global security,” Austen said.

Canada was disappointed when U.S. President Donald Trump announced in May that he is withdrawing from the agreement signed by Iran, the five permanent members of the UN Security Council and the European Union, Austen said.

At the same time, Canada deeply opposes Iran’s support for terrorist organizations, its threats toward Israel, its ballistic missile program, and its support for the Assad regime in Syria, he said.

In 2016, the Liberal government lifted many of Canadian sanctions imposed on Iran after Tehran signed on to the JCPOA.

But Ottawa maintained some of the sanctions on Iran, including through Canada’s Special Economic Measures Act (SEMA), Austen said.

The Islamic Revolutionary Guard Corps – Qods Force, a shadowy special forces unit withing the IRGC responsible for operations in Lebanon, Syria, Iraq and allegedly in Yemen, is listed as a terrorist entity under the Criminal Code of Canada, Austen said.

Iran’s ministry of foreign affairs did not respond to RCI’s request to comment on the matter.