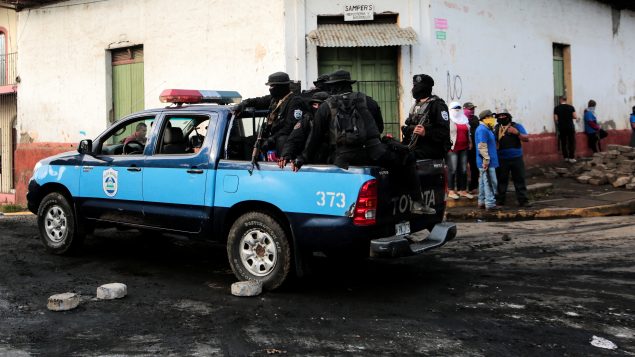 Members of Nicaragua's Special Forces patrol the streets after clashes with anti-government protesters in the indigenous community of Monimbo in Masaya, Nicaragua July 17, 2018. (Oswaldo Rivas/REUTERS)

Canada calls for an end to violence in Nicaragua

Ottawa is also urging the government of President Daniel Ortega to act immediately to halt paramilitary groups and their actions, Freeland said.

“The ongoing violence against students, members of the clergy, journalists, and political and human rights activists is unacceptable and must end,” Freeland said in a statement.

“The disproportionate use of force against students, such as during last weekend in Managua at the Universidad Nacional Autónoma de Nicaragua [National Autonomous University of Nicaragua], is deplorable.” 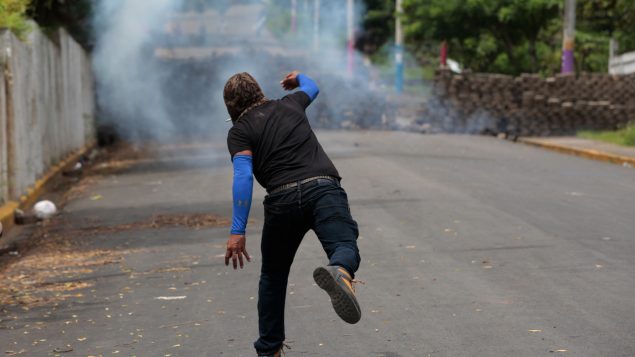 A demonstrator throws a homemade device during the funeral service of Jose Esteban Sevilla Medina, who died during clashes with pro-government supporters in Monimbo, Nicaragua July 16, 2018. (Oswaldo Rivas/REUTERS)

Freeland’s comments came after hundreds of police officers and supporters of Ortega stormed a major stronghold of anti-government protesters on Tuesday, tearing down cobblestone barricades in a symbolic blow against efforts to oust the Sandinista leader.

At least 275 people have been killed in Nicaragua since protests erupted in April over a plan by Ortega’s government to trim pension benefits. The government’s heavy-handed response sparked a wider protest against the former Marxist guerrilla leader.

Ortega has held elected office since 2007 and also ruled the country from 1979 to 1990. The current violence comes after years of calm in Nicaragua and is the worst since the Sandinista movement battled U.S.-backed “Contra” rebels in the 1980s.

“We call on all parties to engage in meaningful dialogue and work toward a sustainable solution to the crisis, and for the government of Nicaragua to help create the conditions for safe, peaceful, and constructive discussions,” Freeland said.

“Canada will continue working with partners in the hemisphere to support the Nicaraguan people in finding a peaceful and enduring resolution to the crisis.” 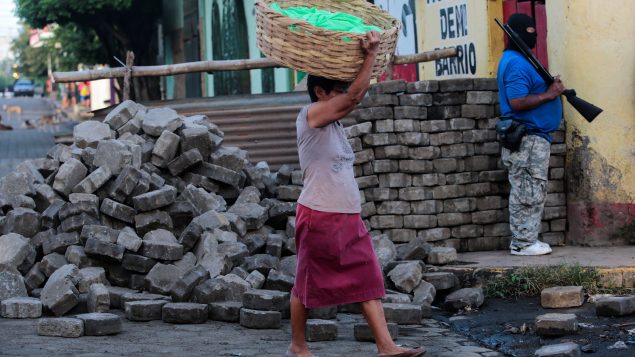 A local resident walks past a pro-government supporter after clashes with demonstrators in the indigenous community of Monimbo in Masaya, Nicaragua July 17, 2018. (Oswaldo Rivas/REUTERS)

Gabriela Maria Jimenez, a Nicaraguan community activist in Montreal, welcomed Freeland’s comments but said Ottawa can and should do more.

Jimenez called on the Liberal government to used its recently adopted Magnitsky Law, also known as Justice for Victims of Corrupt Foreign Officials Act, to sanction government officials and hold the Sandinista government accountable for its violent suppression of anti-government protests.

“We want the federal government to continue speaking out and to defend the rights and liberties of people there,” Jimenez, whose family fled the Sandinista regime in 1979, told Radio Canada International. “We want Canada to sanction the government, which has shown no interest in stopping all this violence in our country.”

Members of the Nicaraguan community in Canada would also like the federal government to facilitate immigration of anti-government protesters, she added.

“I have members of my family that have graduated years ago but still can’t find work in Nicaragua because they’re not part of this government,” Jimenez said. “And it’s not just my family, there are several cases like that.”