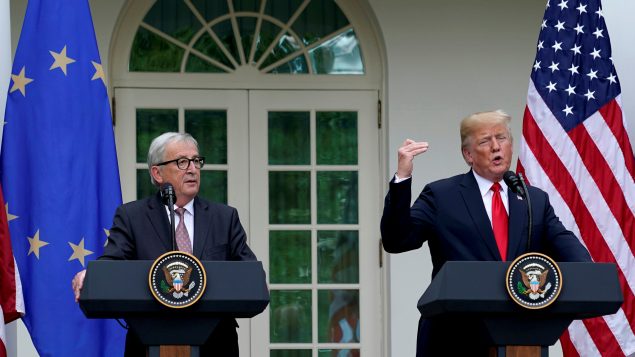 U.S. President Donald Trump and President of the European Commission Jean-Claude Juncker speak about trade relations in the Rose Garden of the White House in Washington, U.S., July 25, 2018. (Joshua Roberts/REUTERS)

The easing of trade tensions between the European Union and the United States signalled by an apparent agreement between European Commission President Jean-Claude Juncker and U.S. President Donald Trump on Wednesday is good news for Canada, say Canadian officials and experts.

In a joint statement, Trump and Juncker agreed to “work together toward zero tariffs, zero non-tariff barriers, and zero subsidies on non-auto industrial goods.”

The U.S. and EU have also agreed to “hold off on other tariffs” while negotiations continue, said Juncker.

And the EU agreed to expand imports of U.S. liquefied natural gas and soybeans. 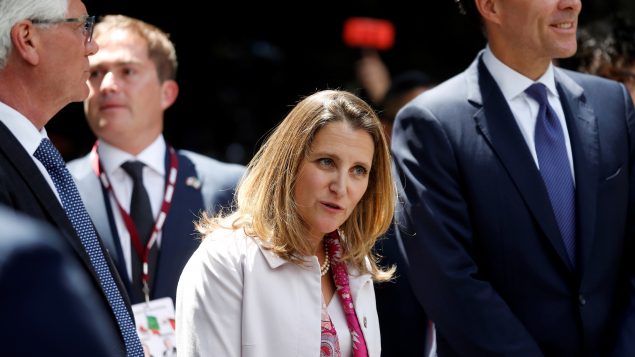 “I really commend everyone involved for pulling back from an action – if that is indeed what is happening – from pulling back from an action that not only is not justified and illegal under WTO and NAFTA rules but actually has the potential to be really devastating for the global economy,” Foreign Affairs Minister Chrystia Freeland told reporters Wednesday in a conference call from Mexico City shortly after the U.S.-EU announcement.

“We need to look at it more closely, but it sounds certainly like some positive news.”

“We share the goal with our European partners of moving forward from this situation where we have tit-for-tat tariffs,” Morneau said on the call. “We know that any moves forward in terms of improving our trading relationships are going to be enabled if can step back from this brinksmanship.” 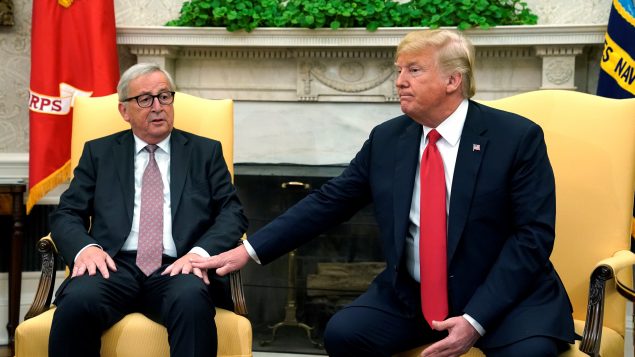 Freeland said while they were not privy yet to the details of the agreement between the EU and the U.S., Canadian officials were not blindsided by it.

She had been in touch with the EU Trade Commissioner Cecilia Malmstrom earlier this week to discuss common trade concerns related to the U.S. tariffs, Freeland said.

“Canada has been working in very close, very effective and very constructive collaboration with the European Union,” Freeland said.

“Canada today is in a very fortunate position of having a trade agreement with both with the European Union and with the United States. And that’s a great place to be.”

James Moore, former Conservative industry minister and member of the Foreign Affairs Minister’s NAFTA Advisory Council, said Ottawa has to wait for details of the agreement before reacting.

“But any time the president moves away from talking about tearing up NAFTA, trading up trade deals and using incendiary language against Canada or traditional allies, economic allies of the United States I think that’s a good thing,” Moore said. “But it’s frankly a day-by-day assessment of the president’s thinking on these matters.”

Moore said he disagrees with suggestions that the EU-U.S. trade truce weakens Ottawa’s negotiating position vis-à-vis Washington over NAFTA and other trade disputes.

“I don’t think you can compare the two relationships, meaning Europe and the North American relationship,” Moore said.

“Certainly our proximity to the United States, the 24-year history of NAFTA, the integrated supply chains, the commercial relationships, the consumer relationships that exist and the North American footprint are well-established, more than a generation-deep.”

The relationship with Europe is much newer in terms of building those supply chains and commercial relationships, he said.

Also as Canada’s experience of negotiating the Comprehensive Economic Trade Agreement (CETA) with the EU shows, nailing down an actual free trade agreement with Europe is a long and complicated process, Moore said.

“I still think they are very much in opening stages of what is a very complicated process to arriving at true market access in a bilateral way,” Moore said.

In contrast, despite some of the existing difficulties in renegotiating NAFTA, the economic relationship between Canada, U.S. and Mexico is much more mature, he said. 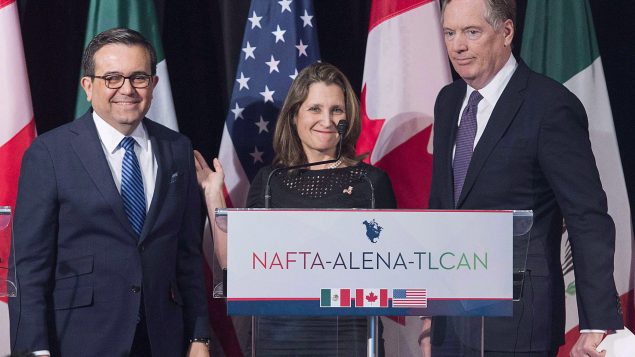 Freeland said she hopes the NAFTA negotiations will move “into a higher gear” now that the Mexican elections are over.

Nevertheless, the U.S. demand for a sunset clause remains a major sticking point in negotiations, especially as the countries negotiate new rules of origin requirements that could result in big changes for auto producers, she said.

“And for us to be asking the companies to make some pretty significant changes based on the new rules of origin we are negotiating and then at the same time introduce an element of built-in uncertainty every five years, we think simply wouldn’t be fair to the car companies and would really run contrary to the whole spirit of NAFTA and of the modernized NAFTA,” Freeland said.

“This is a critical relationship for American job creators, businesses, consumers on a daily basis,” Moore said. “I think we will have a trading relationship that will not stop.”

The question is how Canada, U.S. and Mexico maximize the economic benefit while realizing the importance of having a commercial agreement between the three countries that satisfies some of the frustrations that clearly do exist, Moore said.

“The average person needs to feel and see benefits of trade relationships it can’t just be lines on the graph quarterly reports from corporate interests,” Moore said. “It has to be seen by the everyday voter and everyday citizen as being a successful relationship.”