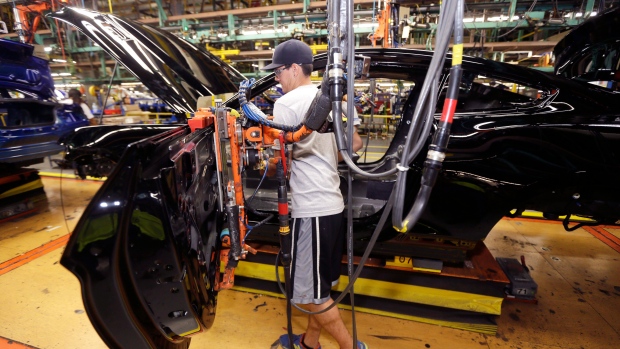 Japan and the European Union organized a meeting for Tuesday in Geneva, where vice and deputy ministers from Canada, the EU, Japan and South Korea will gather to talk about the punishing levies threatened by U.S. President Donald Trump. (Carlos Osorio/Associated Press)

Officials from Canada, the European Union, Japan, Mexico and South Korea will meet in Geneva on Tuesday to discuss a unified response to threats by U.S. President Donald Trump to impose tariffs on U.S. imports of a quarter-trillion dollars worth of autos and car parts.

The U.S. Department of Commerce is studying the possibility of imposing 25 per cent tariffs on imports of cars and car parts, citing national security concerns under Section 232 of the 1962 Trade Expansion Act.

The probe could be completed within weeks, although similar ones ordered last year that led to tariffs of 25 per cent on steel and 10 per cent on aluminum took about 10 months. The Commerce Department has 270 days to offer recommendations to the president after such a probe starts. He then has 90 days to act upon them.

“Japan and the EU organized this meeting of vice (or deputy) ministers from Canada, EU, Japan, Mexico, and Korea,” said Global Affairs Canada spokesperson John Babcock. “The meeting is meant to bring together major auto producing nations so we can discuss our concerns over the U.S. Department of Commerce’s Section 232 investigation of automobiles and parts.”

“We’ve encouraged them to find any and all allies and partners on this tariff mess,” said Volpe.

It was not immediately clear what kind of response the countries could be looking at, although Canada, the EU and Mexico retaliated with their own tariffs after Trump imposed levies on steel and aluminum imports in March.

“I’m not sure that tomorrow needs to be one of those milestone moments,” Volpe said. “I think what’s important is getting everybody who’s affected or potentially affected by this 232 tariff on autos and parts together to see if required, does the global automotive community respond in unison.”

Another option is to fight the United States at the World Trade Organization (WTO).

“We all have an equal problem,” Volpe said. “Canada and Mexico make cars with the U.S. but we all have problem with absconding with WTO principles.”

Trump’s agreement on Wednesday to refrain from imposing car tariffs on the EU in return for reduced trade barriers for U.S. products has helped cool fears of a trade war, but his final decision will not be known until the security investigation is concluded in coming months.

Although hopes of a breakthrough in U.S.-EU trade talks boosted carmakers on Thursday, the planned meetings are a sign that auto-producing nations want to prepare for the worst.

However, the relationship between European and South Korean auto makers cannot be compared to the level of integration that exists between Canadian, U.S. and Mexican automakers, Volpe said.

“The U.S.-based automotive production and the U.S. based automakers and parts makers rely on Mexican and Canadian operations as if they were a home market,” Volpe said. “So there is much more at risk for the American interest if the American administration hurts Canada and Mexico.”

All roads lead to NAFTA

Very important and loud U.S. interests have stood up over the last few months, especially in the last month with hearings into Section 232 tariffs to say, “Don’t hurt your own companies and interests,” Volpe said.

Nevertheless, the road to resolving all these trade problems with the U.S. for Canada and Mexico lies through redoubling efforts to reaching a new deal on the North American Free Trade Agreement, Volpe said.

However, the American side, which prefers to sign separate bilateral deals with Canada and Mexico, has yet to return to a trilateral format, Volpe said.

“I think the Canadian government and industry has been resolute in agreement that’s the table to resolve any and all of these issues,” Volpe said. “We are there, we’re ready to do it and, frankly, we’re not that far apart at all on the automotive.”

With files from The Canadian Press and Reuters