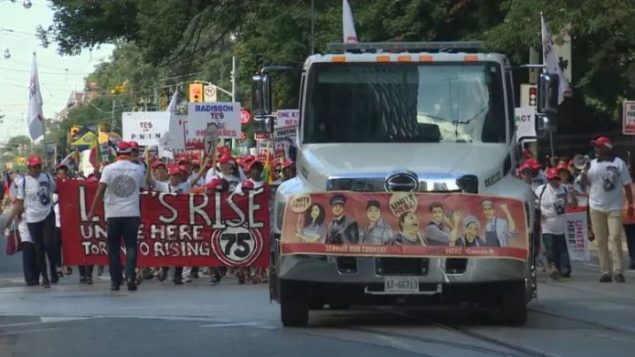 Labour Day annual parade in Toronto, where the route was detoured to honour picketing workers in front of the CNE. (CBC)

This Labour Day holiday is a lot more loaded with the threatening tone of the North American Free Trade Negotiations (NAFTA) hanging over many workers, particularly those in the auto sector.

The attempt to renew and modernise the trilateral trade agreement between Canada, the United States and Mexico, stalled on Friday when Canada’s representatives, and the U.S. team, concluded for the weekend, saying they would resume the talks on Wednesday, September 5th.

“Labour Day is not just another holiday”

U.S. President Donald Trump has threatened a 25 per cent tariff on the 1.4 million cars that are imported into the United States annually from Canada.

But 60 per cent of the parts that go into many of those cars, come from the United States. The industry in highly integrated.

While golfing over the weekend, the U.S. President tweeted there is no need to keep Canada in the new NAFTA.

Hassan Yusuff, President of the Canadian Labour Congress, in an interview last week, told me that “Labour Day is not just another holiday”.

He said, “It’s an important part of how this country has been formed and continues to be shaped by the struggle of workers in this country and everybody should appreciate very much the fact that there is an independent labour movement in this country.”

Gerry Dias, the head of UNIFOR, the union that represents the autoworkers told CBC News today, that workers are “obviously concerned”.

Meanwhile, the route for the annual Labour Day Parade, in Canada’s largest city, Toronto, had to take a detour this year in order not to cross the picket lines of IATSE local 58. 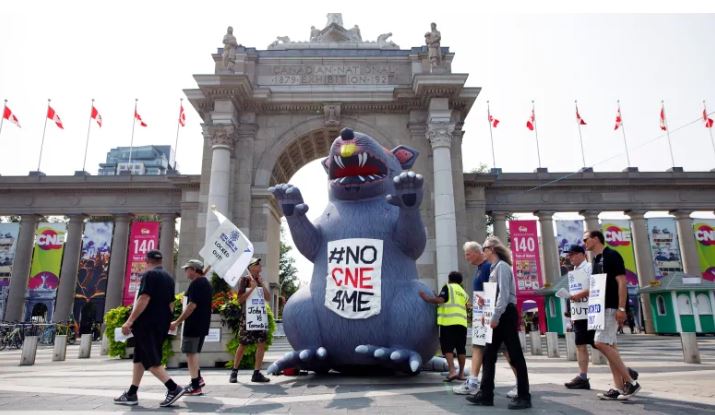 Four hundred workers of the local branch of the International Alliance of Theatrical Stage Employees (IATSE) are locked out of the annual Canadian National Exhibition event.

Instead of ending the largest Labour Day Parade in the CNE grounds, as they have for many years, the parade ended in Nathan Phillips Square, in front of Toronto’s City Hall.

Labour Day, the occasion much of the rest of the world celebrates in May, is celebrated in Canada on this day, as it is in the United States.

Our labour history is closely linked to the beginning of the country in 1867.

The origin goes back to 1872 when the printer’s revolted in Toronto.

At that time, labourers were trying to establish a maximum work week of 54 hours.

It was also an era when union activity was considered illegal and the organisers were jailed.

On April 15th of that year, 10,000 people marched in protest and eventually Prime Minister John A. Macdonald repealed the anti-union laws and arranged the release from prison of the organizers as well.

Known as the Nine-Hour Movement, there were parades held in support, and the printers’ strike led to an annual celebration.

The date for the national holiday was adopted in 1894 by the government of Prime Minister John Thompson.

The maximum work week is now generally accepted to be 40 hours.for 5 days of work, not 6.

There is labour strife, however, with the local branch of the International Alliance of Theatrical Stage Employees (IATSE)