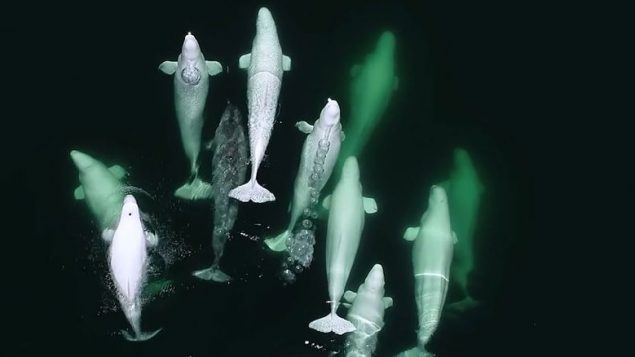 A view from a small drone flying over the pod of young beluga showing the darker narwhal among them. (GREMM)

(public commenting open on all RCI stories at bottom. Comments will be posted after approval)

The narwhal, an iconic Arctic species, is almost never spotted in the south.

Somehow one narwhal, thought to be a young male, became lost, really lost, and ended up far to the south in the St. Lawrence.

Not only that, but the narwhal seems to have joined a group of belugas which appears to have completely accepted the stranger. 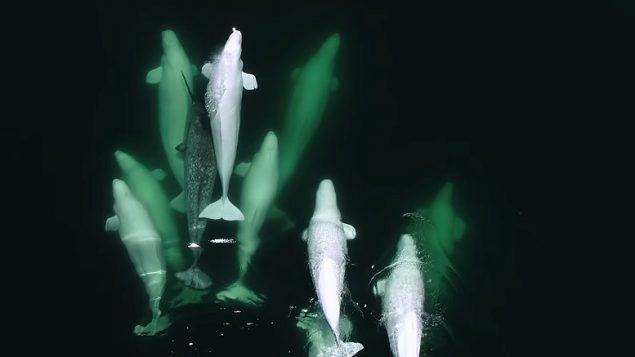 Here you can see the distinctive narwhal tusk against the white skin of the beluga below. (GREMM)

Beluga tend to prefer and hunt in shallower water and stay near shore, while narwhal tend to be deep divers when looking for food.

After the last ice-age, a segment of beluga remained in the St Lawrence, while the rest of the species moved to the far north. With about 1,000 km separating them, Arctic beluga and St Lawrence beluga do not interact. 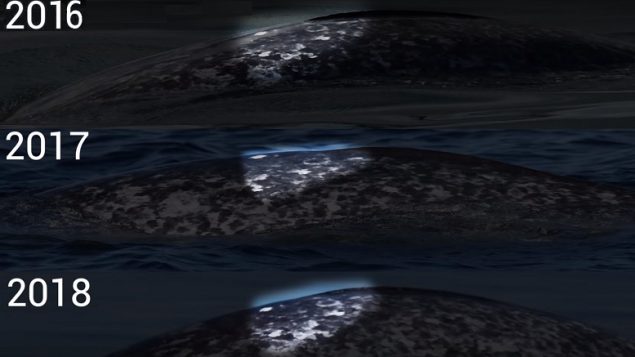 Experts believe that because that in this case because narwhal and beluga are both very social in comportment it may have helped in the joining of the two species; the narwhal looking for companions, and the beluga adding a member to their group

GREMM- via youtube-“swimming as just one of the boys’

What is also unusual is the sighting was first made in 2016, and researchers saw the same narwhal with the group in 2017 and again this year, suggesting that the narwhal has decided to call the St Lawrence home, and the beluga as family.

One comment on “A whale of a tale: Lost Narwhal finds new “diverse” friends”