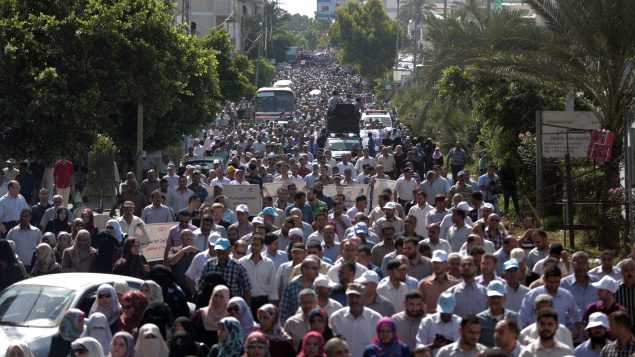 Thousands of Palestinian UN workers protest cuts made by UNRWA to cope with a $300-million budget withdrawal by the U.S. government. (Khalil Hamra/AP Photo)

The UN agency for Palestinian Refugees (UNRWA) has moved nine international staff out of the Gaza Strip following mounting protests by employees over layoffs and cutbacks.

UNRWA has fired 113 Gaza employees and turned hundreds of jobs into part-time positions to cope with the U.S. withdrawal of $300 million in its planned 2018 funding. The agency provides food, education and health care to five million Palestinian refugees in several countries including 1.3 million people in Gaza alone. The territory’s economy has been ravaged by a blockade imposed by Israel and Egypt since 2007.

Over half a million Palestinian children depend on UNRWA for their schooling. (Felipe Dana/AP Photo/file)

In early September, UNRWA’s chief spokesman, Ghris Guinness, told BBC News the U.S. funding cuts would be utterly devastating. “It’s likely to be widespread, profound, dramatic and unpredictable because, let’s make no mistake, some of the most marginalised and fragile and vulnerable communities in the Middle East are going to likely suffer because of this, he said.”

Germany and other countries have promised to increase their contributions to the agency to try to maintain stability. In March 2018, Canada promised up to $10 million in emergency humanitarian assistance for Palestinian refugees living in the West Bank and Gaza.

Palestinians prevent an UNRWA employee from setting himself on fire during a protest against staff cuts. (Khalil Hamra/AP Photo/July 25, 2018)