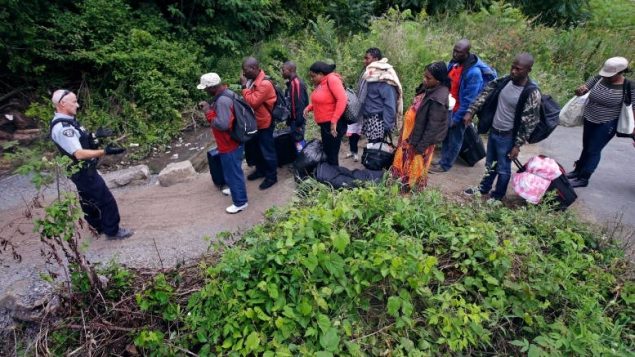 August 7, 2017, migrants crossing into Canada from the U.S to claim asylum. The crossing is at place away from an official border point of entry. Tens of thousands have crossed at this illegal point into Canada. Some say ending the STCA would open the floodgates to migrants making asylum claims. Ontario and Quebec have already demanded 200's of millions of dollars from Ottawa to deal with the tens of thousands who have crossed at illegal points into Canada. (Charles Krupa-AP)

Are migrants crossing ‘illegally’ into Canada, or ‘irregularly’?

As over 30,000 migrants have crossed into Canada along undefended border points, a semantics debate continues to rage among politicians as to whether they are crossing “illegally” or “irregularly”.

The bitter political fight is between the opposition Conservative Party, and the government Liberals.

The Conservatives want the government to do something to stem the flow across the border which is costing taxpayers hundreds of millions of dollars since January 2017, and the Liberals who insist they are working on it, but claim under international law,they cannot physically prevent migrants coming across from the U.S and claiming asylum and that the act of doing so is not illegal under international law.

There have also been heated arguments especially between the federal immigration minister Ahmed Hussen and the newly elected provincial government in Ontario, during which Hussen said an Ontario provincial minister was being “un-Canadian” for her attitude and use of “illegal” in regard to migrants. 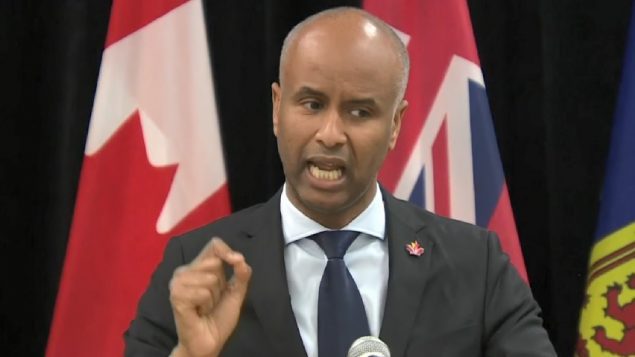 On July 13 at a press conference, minister Ahmed Hussen, visibly agitated said the Ontario Premier and the provincial minister for immigration issues as being “divisive, fear-mongering, and un-Canadian” with their attitude towards the migrants and use of words like “illegal” (via CBC)

Now a CBC news report notes that following the verbal altercation with the Ontario government in July the immigration department quietly changed the wording on a web page which had said “illegal” in many instances and now reads “irregular”.

The page entitled “Claiming asylum in Canada- what happens? Was changed in July and the six mentions of “illegal” were replaced with “irregular” to describe crossing into Canada at somewhere other than an official border control point.

A section of the original webpage on July 4 (Wayback archived) showing two cases of words which were quietly changed on July 9 (bold is mine):

Both the Prime Minister, and the immigration minister have used the term “illegal” earlier this year referring to migrants but have been careful since to switch to using the term “irregular” only.

A spokesperson for Immigration, Refugees and Citizenship Canada said in an email to CBC that the ministry made incremental changes to eliminate confusion about the terminology and mis-characterisation of asylum seekers as being in Canada illegally.

According to Canada’s Customs Act, it is illegal to enter the country without proper paperwork and or at any place other than an official point of entry.

For media outlets, there are differences as well

The Globe and Mail, a major and influential national newspaper, has been using illegal and occasionally “unlawful” in its stories, as in this one of  September 12, entitled “Asylum seeker surge choking Canada’s refugee system: “Overwhelmed by the number of migrants, the Immigration and Refugee Board (IRB) has only managed to finalize 15 per cent of the 27,674 asylum claims made by people who illegally entered Quebec”.

The Toronto Star, the most widely distributed weekly and second most distributed daily paper also uses “illegal’ as in this story of September 8, using the title “Canadian border agency has deported 398 ‘illegal migrants’ out of 32,000.

Global TV on its website has used both illegal and irregular, but tends more towards irregular in recent months.

CTV seems to have begun the year using the term illegal, but recent news reports seem to have switched to use the term irregular.

The French language media in Quebec seems to not follow the government line consistently referring to the situation as “l’immigration illégale” or “des migrants illégaux”.