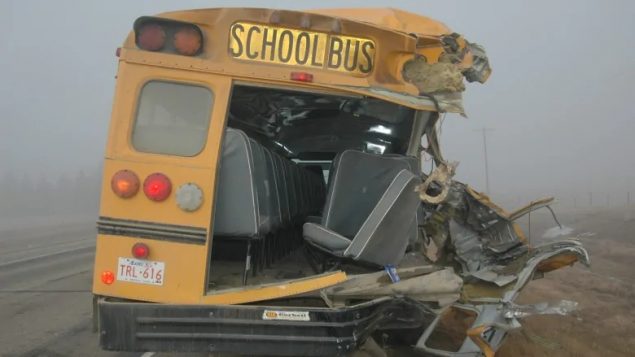 A 17-year-old died after being ejected from a school bus that was hit by a gravel truck in Rimbey, Alta., in 2008. Over the past 30 years, there have been at least 23 school bus passenger deaths in Canada. (Submitted by Kirsten Hodgeson)

Why no seatbelts in school busses?

School busses have a fairly good safety record, generally a child is many times safer riding in a bus than in a car.  A 2006 report by the Center for Innovation in Pediatric Practice (CIPP) in Columbus, Ohio  noted that many 40 per cent of injuries occur due to accidents or collisions, although most are minor. The report notes that a quarter of reported injuries are due to getting on or off the bus, while more deaths occur in an area of about 3-4 metres around the bus than in the bus.

Seatbelts, and a requirement to actually use them, are mandatory in Canada for passenger vehicles, but not for busses.

In 1984, Transport Canada conducted a study that showed that seatbelts on school busses would not reduce injury and may in fact result in more serious injuries. That study has been widely quoted by bus companies to not install seatbelts

An investigative news story by the CBC, Canada’s national public broadcaster on seatbelts in school busses has come to a much different conclusion

Investigation by “The Fifth Estate” programme consulted a number of experts and reports and says many deaths and injuries could have been prevented through the use of seatbelts. 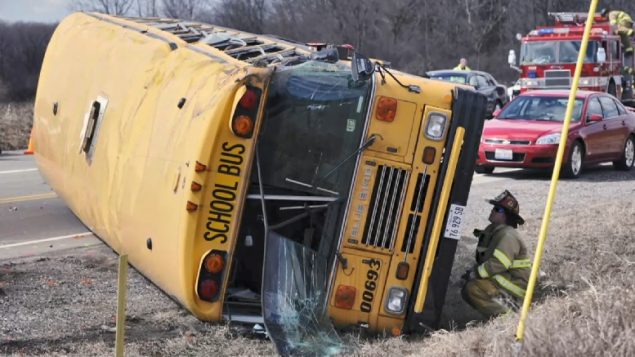 In 2010, a Transport Canada study indicated seatbelts could prevent injuries in side impact cases.

The federal government did introduce guidelines for seatbelt use for bus companies which on their own initiative, chose to install them.

As a result of the CBC findings, federal Transport Minister Marc Garneau has instructed his department to re-examine the issue and evidence collected since the 1984 study.