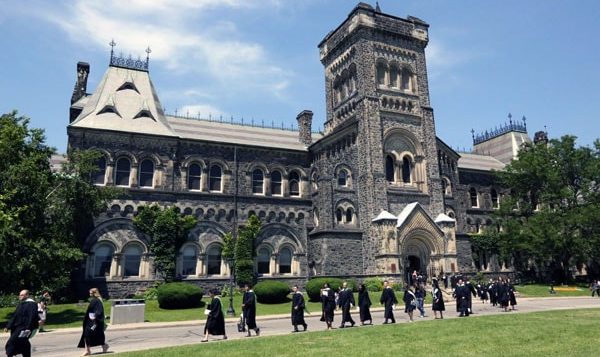 The University of Toronto is the top-ranked Canadian school in the latest U.S. News and World Report rankings of universities around the world, finishing 20th. (utoronto.ca)

U.S. News and World Report has released its annual rankings of world universities and Canada has 34 schools on the list.

For comparison, the top 10 was made up largely of universities in the U.S. with Harvard, the Massachusetts Institute of Technology and Stanford ranked the top three.

Two schools in the U.K. made the top 10: Oxford came fifth while Cambridge placed seventh.

Rankings can vary, depending on the field of study being ranked.

U of T was ranked the fifth best school globally for clinical medicine, 10th for arts and humanities and 12th for biloogy. (utoronto.ca)

For instance, the University of Toronto was the fifth best school globally for clinical medicine, the 10th for arts and humanities and 12th for biology.

UBC ranked number 12 for environmental studies while the University of Guelph finished 12th in agricultural studies.

The University of Waterloo placed 4th globally for computer sciences and the U of T and McGill finished 17th and 18th, respectively, for neuroscience.

The rankings evaluate colleges and universities on 16 measures of academic quality including such widely accepted indicators of excellence as first-year student retention, graduation rates and the strength of the faculty.

With files from U.S. News and World Report, Huffington Post